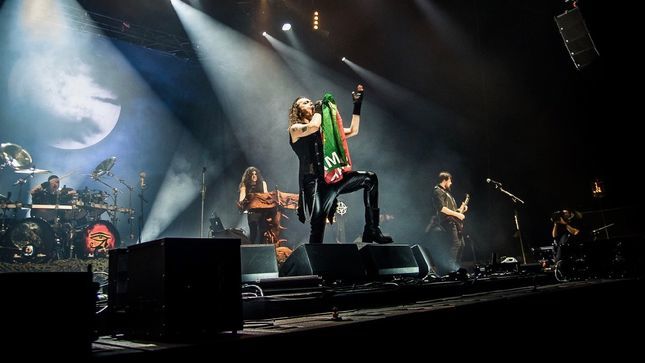 Originally released by the band in 1998, Sin/Pecado became the great divider of the Moonspell wolfpack. Produced by their longtime companion Waldemar Sorychta (Wolfheart, Irreligious), the songs of this “accursed” album were signs of a rebellion of the band against the sound that made them famous in the scene. Instead of wolves and vampires, Moonspell set the compass to songs filled with electronica and darkwave moods that talked about the European Community or the love for a woman. December 13th 2019 will see the band, in collaboration with Napalm Records and under the license of Century Media, to re-release their path breaking Sin/Pecado album in a Deluxe Edition; serving a sinful cup to our lips and see if that red wine has aged better or tastes sweeter than more than 20 years ago.

“Moonspell’s biggest flaw or quality, judge for yourself, is never to be satisfied with anything,” frontman Ribeiro says. “There was true creative anguish burning inside us in 1997, after we were done with the endless Irreligious’ tours, that created the perfect (shit)storm that would be Sin. It was a strange year for us, Paradise Lost, My Dying Bride, were letting loose and seemed to be also under the same mood as we did, or vice-versa. It doesn’t matter. Metal was turning its wheel and we’re all on the falling side. We took the fall and enjoyed doing it anyway. It wasn’t Moses dividing the waters, but it did hurt sometimes to feel alone. Curiously a lot of other people entered Sin’s mood a couple of years later and now they beg of us to play those songs live. If you’re reading this and need another taste at sin, let’s indulge each other and pick up that second skin from the late-‘90s deep closet.”

Sin/Pecado was recorded at the Woodhouse Studios in 1997. The re-ssue will be coming on CD Digipak as well as LP Gatefold, consisting of Sin/Pecado and Moonspell's hard-to-find 2econd Skin album. Find preorders at this location.

Formed over a quarter century ago, Moonspell have faced both triumph and tribulation to become the most internationally celebrated Portuguese metal band in history. It was announced back in May that, for the first time, their unique story is told in full in the new book, Wolves Who Were Men: The History Of Moonspell, scheduled for release in English language in fall 2019. The release date has now been confirmed for October 31st.

An epic, in-depth and candid read, author Ricardo S. Amorim follows the band from youthful black metal fans to experienced musicians battling the challenges of an ever-changing music industry, exploring Moonspell’s evolving sound while always focussing on the often-troubled human stories that lie behind the music. Including lengthy interviews with the group’s current and former members - as well as various comrades, including Rotting Christ, Cradle Of Filth, Samael, Kreator, The Gathering and Amorphis - it also features a wealth of images, many previously unpublished.

Presented by Crypt Publications, in unholy alliance with Cult Never Dies and Fernando Ribeiro's own Alma Mater, Wolves Who Were Men is due to be issued in a standalone paperback format, as well as a deluxe box set format, including several exclusive extras. Those excluisves include a CD featuring the out-of-print 1993 Anno Satanæ demo plus bonus tracks by pre-Moonspell outfit Morbid God, a large and extremely high-quality flag;, deluxe reinforced card box with hot foil gold Moonspell logo, 12 x 350gsm art prints, featuring superb photography of the band, Wolves Who Were Men double-sided print bookmark, guitar plectrum with double-sided print, and a certificate of authenticity signed by all band members.

Wolves Who Were Men: The History Of Moonspell is a must read for all Moonspell fans, as well as anyone interested in the continued development of the metal genre and the reality of life in a full-time metal band.