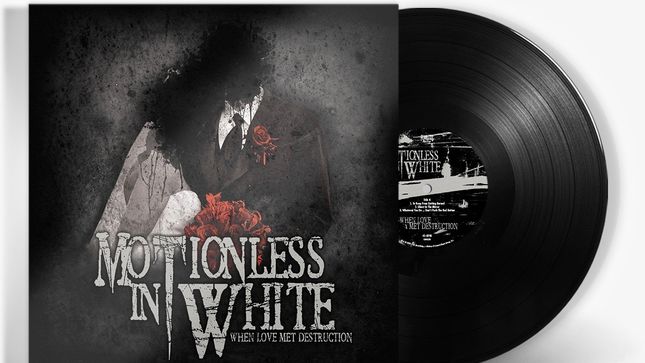 Craft Recordings announce a vinyl reissue of When Love Met Destruction, the second EP from Motionless In White. Due out September 20, this reissue will mark the first availability of the fan-favorite on vinyl. The six-song EP, originally released in 2009, includes the band’s provocative first single, “Ghost In The Mirror”.

Originally from Scranton, PA, Motionless In White formed in 2005 when the band members were still in high school. Influenced by the likes of Marilyn Manson, Depeche Mode, Slipknot and Rob Zombie, the young group soon gained a following for their moody blend of driving metal, goth, and industrial music, as well as their striking aesthetic. Following the release of their 2007 debut EP, The Whorror, and a successful run on the Warped Tour, the band went back into the studio to work on new material.

Side A:
"To Keep From Getting Burned"
"Ghost In The Mirror"
"Destroying Everything"

Side B:
"Whatever You Do... Don’t Push The Red Button"
"Billy In 4C Never Saw It Coming"
"The Seventh Circle"