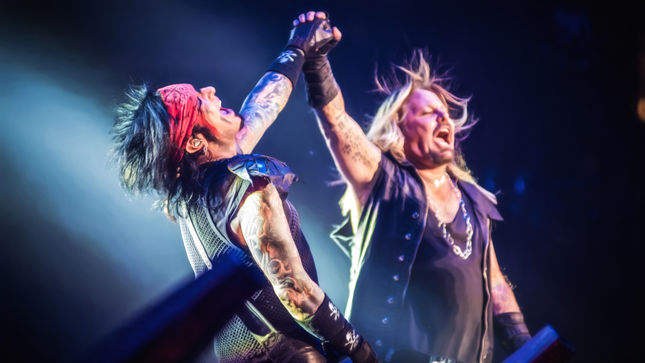 For one night only, Mötley Crüe: The End comes to selected cinemas in Europe, Latin America, and Australia on October 13th. Tickets on sale soon at this location.

Known for their over-the-top production, Mötley Crüe did not disappoint for their last show ever on New Year’s Eve: from massive, cutting-edge pyro, including Nikki Sixx’s bass guitar spitting fire over 30 ft. into the air, and Tommy Lee’s “Crüecifly” drum roller coaster, amongst many other spectacular elements. Lead singer, Vince Neil, delivered an emotional “thank you” speech to the audience, while the band supplied next-level, high-octane fueled energy, ringing in the New Year on stage with thousands of balloons raining down on the crowd. The grand finale of the show included a blow-out performance of their hit single, “Kickstart My Heart” with Nikki Sixx and Vince Neil floating above the audience in far-reaching “cherry-pickers.” Leaving fans in tears, the show concluded with an emotional encore rendition of “Home Sweet Home” from the second stage riser in the center of the audience.

Mötley Crüe: The End was produced by Nate Parienti and Live Alliance, directed by Christian Lamb with Jeff Tremaine, creator of the Jackass series, directing the documentary segment.