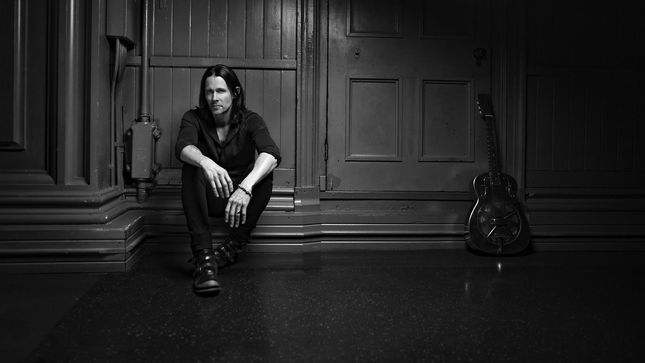 Myles Kennedy (Alter Bridge, Slash Featuring Myles Kennedy & The Conspirators) has announced a string of intimate headline dates in the UK, his first as a solo artist. The six shows take place in March, to coincide with the release of his debut solo record, Year Of The Tiger.

Special guests are to be confirmed. Pre-sales kick off at 9 AM this Wednesday with O2 and 9 AM Thursday with Live Nation. Tickets go on general sale from 9 AM this Friday at livenation.co.uk and all good box offices, or direct from the venues. Tickets are sure to fly out the door with venues of this size, so don't delay if you don't want to miss out. 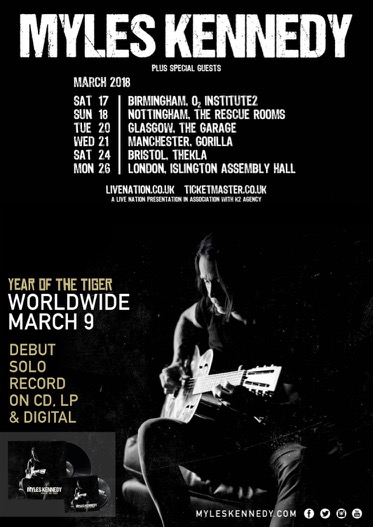 Kennedy is set to release his debut solo album, Year Of The Tiger, on March 9th. The album will be released worldwide via Napalm Records. Check out a teaser for the upcoming "Haunted By Design" lyric video:

In the clip below, Myles discusses the album's title track, "Year Of The Tiger", saying "it's an idea that had been percolating for years."

Furthermore, Kennedy has now shared the video for the compelling title track, giving fans a first glimpse of what's in store on the new record. Watch "Year Of The Tiger" below.

Directed by Dan Sturgess, the video is based on a concept created from a discussion between Kennedy and his manager. The video follows a reflective Kennedy as he travels through the memory of the loss of his father in 1974 - the year of the tiger.

On Year Of The Tiger, Myles embarks on his first venture as a solo artist by embracing musical elements and influences he hasn’t explored until this point in his career. Kennedy himself plays banjo, lap steel, bass, and mandolin, in addition to guitar throughout the album. His emotional journey and personal story is captured in a bluesy-Americana album with a twist of country and rock, highlighting his unmistakable and soulful voice.

Best Buy stores in The United States will offer an exclusive version of Year Of The Tiger, featuring three acoustic demos: "Nothing But A Name"​, "The Great Beyond"​, and "Haunted By Design".