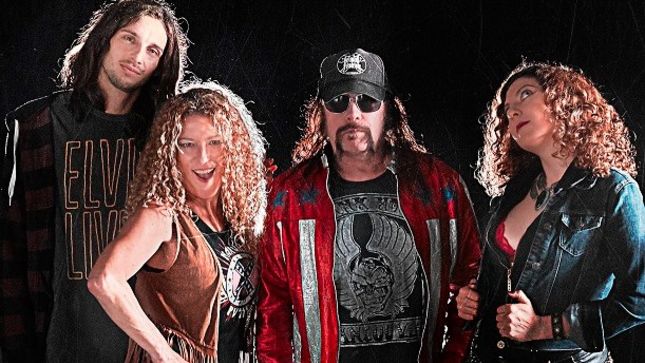 Just prior to taking a break from recording their as yet untitled seventh studio album - to go and see ZZ Top live at Carson Center in Paducah, KY - Nashville Pussy guitarist Ruyter Suys contacted Brave Words with the following exclusive update:

"We're in the studio in music central - Glasgow, KY. We got local hero Greg Martin from The Kentucky Headhunters playing fucking slide on our Nazareth song, 'Woke Up This Morning'. He let me play his '58 Les Paul he got from Hank Jr - and it used to be owned by Skynyrd's Ed King."

"Daniel Rey (Ramones, The Misfits) is producing. We're at David Barrick's studio - this county used to be dry - back when we did Say Something Nasty here (in 2002). Booze has been sold a total of four months here now."

Greg Martin also chimed in, saying, "Another fun day at the studio with Ruyter Suys, the Nashville Pussy cat gang, Daniel Rey and David Barrick. Of course, Mr. E was there to monitor things. Got to play slide on their COOL version of 'Woke Up This Morning' by Nazareth. Tuned ole' 'Hank' up to Open B, plugged into Ruyter's 1972 Marshall Super Lead 100, it was a fun time for all! Great seeing Blaine and Ruyter again, it's been a few years."

Nashville Pussy is aiming for an April 2018 release for their new album, via an as yet undisclosed label. Vocalist and rhythm guitarist Blaine Cartwright previously commented, "As far as what it's going to sound like, let's just say it'll sound like if The Sex Pistols did Physical Graffiti (by Led Zeppelin)."

Until then, fans can rejoice in the fact that the SPV compilation Ten Years Of Pussy, highlighting the best songs from Up The Dosage, From Hell To Texas, and Get Some, will be available on double vinyl on October 13th.

​In live news, Nashville Pussy return to the road in October and November with shows scheduled in: Iceland, France, The UK, Denmark, Sweden, Norway, Germany, Croatia, Netherlands, Belgium, and Spain. See their complete tour schedule at this location.

And, for your viewing pleasure, Nashville Pussy has put together the European Summer Tour 2017 Aftermovie - three weeks in three minutes; talk about a wild ride.