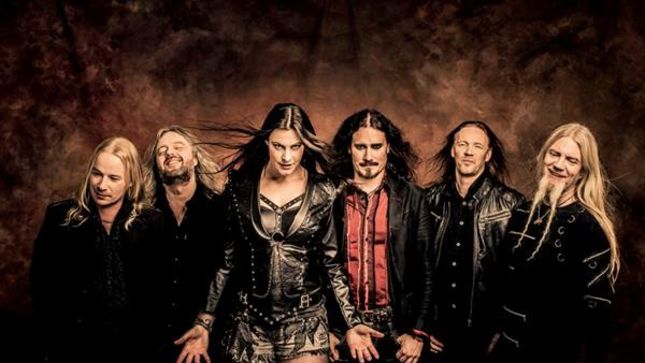 Finland-based symphonic metal storytellers Nightwish are currently working on their upcoming new album and have released the eighth album trailer. In this episode the band is visiting the rainy city of London to record the choir, orchestral parts and percussions for their new album at Angel Studios.

The yet-untitled creation will be the first Nightwish studio-record to feature Dutch vocalist Floor Jansen and is set for a release in spring 2015 via Nuclear Blast. Longtime drummer Jukka Nevalainen will sit out on the recording sessions due to health issues; Kai Hahto (WINTERSUN a.o.) will replace him.

Commented Nightwish keyboard player and main songwriter Tuomas Holopainen: “This must be the sixth or seventh time we’re working with these people. We’ve realized what they can do during these years. So it’s really not a surprise anymore but it hasn’t ceased to amaze me. The level of professionalism is just unbelievable. But even more importantly, they clearly like what they’re doing. The guys we’ve worked with for over 10 years are still up for it.”

Added session-drummer Kai Hahto: “The professionalism is amazing. We were recording ethnic percussion yesterday. Some of the guys had played on Star Wars movies – and done Hans Zimmer soundtracks. I felt myself like a humppa drummer. It was pretty amazing. They know their prima vista. You give them the notation, and they’ll nail it in no time.”

Nightwish also revealed the famed evolutionary biologist and atheist writer/leader Richard Dawkins as a guest on their eighth studio album.

Nightwish continue to roll out live dates for 2015. For their complete itinerary visit Nightwish.com.