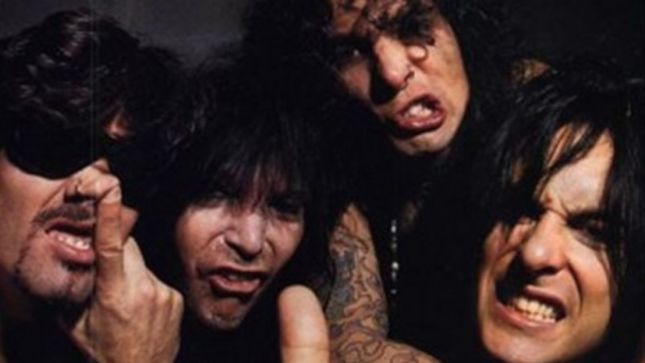 In the latest issue of Sweden Rock Magazine, formeer Mötley Crüe bassist Nikki Sixx looks back on the band's self-titled album released in 1994 featuring John Corabi on vocals in place of Vince Neil. The album was a commercial failure and the band's first release after signing a 25 million dollar contract with Elektra Records. It was Corabi's only album with the band

Sixx: "I've gotta tell you, I think it was a very unfocused record. It was painful for me, because John Corabi can't write lyrics, and I had to do all that work. It was the first time I ever had to work with somebody that wanted to participate in the lyrics. And my standard is so high that it was just… it was so hard, it took months. He was a nice enough guy but he just didn't have that fire, and it was hard for me. And I just felt like Bob Rock (producer) really got us because we just really wanted to get the riffs going and stuff, and he captured that. But, in general, it felt like a great-sounding record but a little bit unfocused. That's just me."

Corabi has since respoinded to Sixx's comments via Facebook:

"As my email, texts, and phone is blowing up over this, I'd like to publicly retort to this....

Thank you to Mötley Crüe for the 5 years we had together. I'm extremely proud of the record we recorded TOGETHER! And your phone call to me asking to join your band has honestly helped my career immensely. I have done everything since, my way, under my terms, and I'm happy knowing I haven't followed any trends, caved to any record label, and just basically been myself. I am who I am, I write the way I write, and I'm beyond happy being the person I am. I have nothing but mad respect for Mötley, including Mr. Sixx, and wish them all the best with their future endeavors.

I really don't give a shit about any of this nonsense. This is it, kids. Enjoy your day!"

The clip below is a sample of former Mötley Crüe guitarist Mick Mars' new song "Gimme Blood" featuring Corabi, currently working under the 1313 banner by the looks of Mars' official Facebook page.