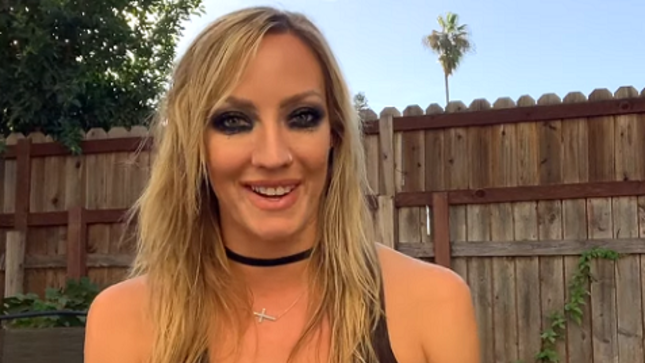 Guitarist Nita Strauss (Alice Cooper) has begun work on her second solo album. The currently untitled affair serves as the follow-up to Controlled Chaos, released in 2018 via Sumerian Records.

A note from Nita reads: "I decided not to go the Kickstarter route this time around, but it was such an awesome collaborative experience that I still wanted to do something cool to involve you guys and make you a part of the process

So drum roll please… meet my Patreon! This page is going to be a behind the scenes look at everything that goes into a full album cycle, from the gear, the actual making and recording of the record at my home, in the studio, and on the Alice Cooper tour, as well as press, photo shoots, music video shoots, rehearsals, solo touring and more!

Plus, I’ll be sharing all the other projects I’m working on there first… if you’ve been dying to see the new JIVA color, it’s up there right now ;) There’s also a full minute snippet of the latest song I’ve been working on, and more to come as the Patreon page evolves!

I’ve included several different tiers so you guys can be involved at whatever level you would like! The whole goal here is to have a cool, fun and awesome space where I can connect more closely with you guys and make you a part of making this album happen.

Thank you so much for reading and I hope you’ll check out the page and see what it’s all about!!!! Head here for more info and to be a part of the community!"