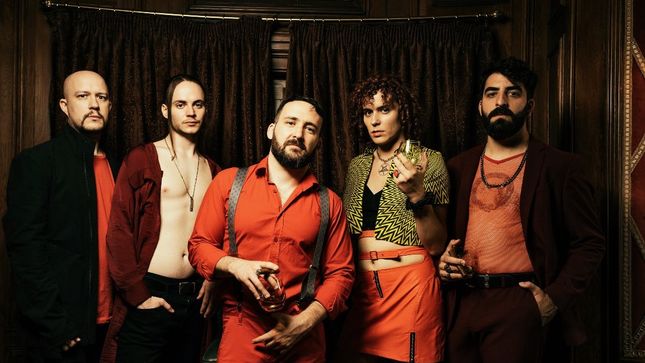 Obsidian Kingdom will be hosting their very own two-hour special via Gimme Radio tomorrow, September 16, at 5 PM, EDT. The band has curated a special playlist and will be present during the show's duration for a live chat and Q&A. You can sign up for free and tune in here.

Obsidian Kingdom will be releasing their new album, Meat Machine, on September 25 via Season Of Mist. The full-length is a harsh sonic journey, abject and stentorian like a love letter from a school shooter. The perverse album is a rough drop into a nightmarish world of forbidden desires, frustrated sexual urges and the dark realms of the subconscious mind. .

In conjunction with the announcement, the band has unveiled the intense and heavy first single, "Meat Star", along with a stunning new music video. Directed by Ferran Ureña (Vivir Rodando) and Eric Morales (Universal Music Group), the video features a top-notch production that weaves together a tale of humankind's primal nature. The video can be viewed below.

The band comment: "Reminiscent of the magickal works of Alejandro Jodorowsky or Kenneth Anger, 'MEAT STAR' is a bizarre dream-like odyssey where symbols old and new walk hand in hand to convey a powerful message: the meaning of your existence will eventually find you, and the price will be some kind of death. 'MEAT STAR' is a song about accepting hardship and pain as a means of discovering your true purpose, and the transformation and sacrifices you must undergo once you've committed yourself to that very goal. It is the soundtrack to the crucifixion, to the dismemberment of Dionysus and to the drowning of Osiris. It is an ode to the regenerative power of endings, once you’ve realized that surrendering is the only way to win."