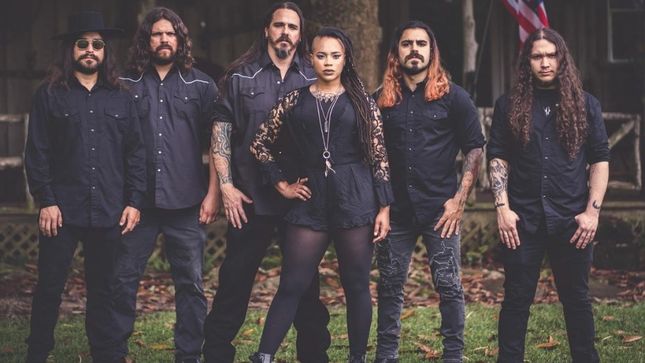 With “The Adorned Fathomless Creation” US prog metal outfit Oceans Of Slumber release the second single off of their recently announced new and self-titled album Oceans Of Slumber, due to be released on September 4, 2020, via Century Media Records worldwide.

Oceans Of Slumber comment: “Violence, revenge, retribution, repeat. The adorned fathomless creation that is humanity, that is society, that is each of us. Warped and blinded by this eye for an eye mentality, we stumble along the path of this insidious and cyclical nature of violence and pain. Hate begets more hate. Fear a contagion. Compassion a lost art of emotional bending. Outcry, anger, rage, repeat. We long for the gentle embrace of compassion, hope to be soothed by a love that is no where to be found.  So the machine churns, spewing smoke along a degenerative wasteland. Victim, valor, vengeance, repeat. Our only hope is to remember that among ourselves is an ability to connect, an ability to heal, an ability to grow. To break the machine and free ourselves from its corrosive and cancerous nature. Teach, acknowledge, heal, repeat.”

“We’d like to thank Giannis Nakos for the beautiful artwork that captures not only our imagination, but the depths and darkness of the story the album holds within. While there’s plenty more to come, we must be patient for the full album that’s set to release September 4th. For now please enjoy 'A Return To The Earth Below',” says Cammie Gilbert.

Oceans Of Slumber is available as Standard CD Jewelcase, Gatefold black 2LP+CD, Digital album and can be pre-ordered here.

"A Return To The Earth Below" video: