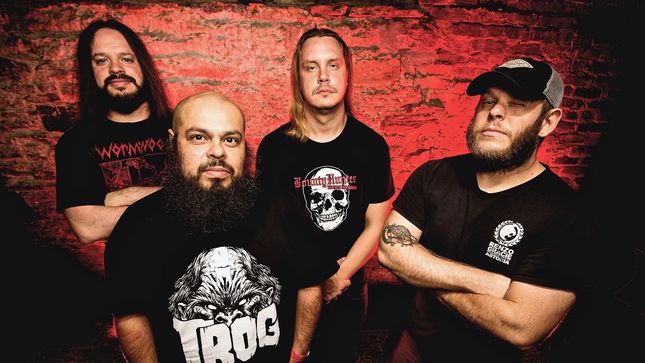 Agonia Records, in cooperation with Origin, recently announced the official vinyl-only reissues of the band's self-titled (2000), Informis Infinitas Inhumanitas (2002), Echoes Of Decimation (2005), and Antithesis (2008). All four albums are out on October 25. Pre-orders here.

The reissues of Origin’s crucial and genre-defining back catalog are part of Agonia Records’ "Origin Of Origin" series, of which Abiogenesis - A Coming Into Existence, a compilation of re-recordings by founding member Paul Ryan from Origin's A Coming Into Existence EP and previous incarnations, Necrotomy and Thee Abomination, is the first. The reissues of Origin’s self-titled and Informis Infinitas Inhumanitas are particularly important to vinyl connoisseurs, as both albums weren’t released to vinyl in 2000 and 2002, respectively, while Echoes Of Decimation only had an ultra-limited picture disc run. The time is now to re-introduce these tech-death metal milestones.

"Excited to present and complete the "Origins Of Origin" series with our first four albums on vinyl with Agonia Records!," Origin founding member/guitarist/vocalist Paul Ryan says. "This is the first time the Origin and Informis Infinitas Inhumanitas albums have ever been pressed on vinyl. Echoes Of Decimation and Antithesis are also being pressed for those who missed out on the fun the first time through! Thanks to all the friends/fans of Origin for the support all these years!"

On Origin, the band says: "The band was finally able to establish itself as a live presence, breaking free from being rooted in Kansas by touring across North America and developing itself as a devastating live band. We started to separate ourselves from our older material as we were changing sounds with the addition of James Lee [vocals], who became our touring vocalist for the latter part of the Origin tour cycle."

On Echoes Of Decimation, the band says: "We unfortunately had more lineup changes but added a different sound on guitars when Clinton Appelhanz rejoined (formerly on bass 1997-98) and we started incorporating riffs with arpeggios into our song structures with a more straightforward drum attack. With James King on drums. Some of the most vicious sounds of death metal at the time!"

On Antithesis, the band says: “The first Origin album to have previous members rejoin to write another album (the “Informis…” lineup). It was a second chance to compose the most devastating music we could come up with at the time. We collaborated on what we had learned in the past and just tried to push the limits of what we could do again by pushing the tempos to the redline and working on more dynamic song structures as well".