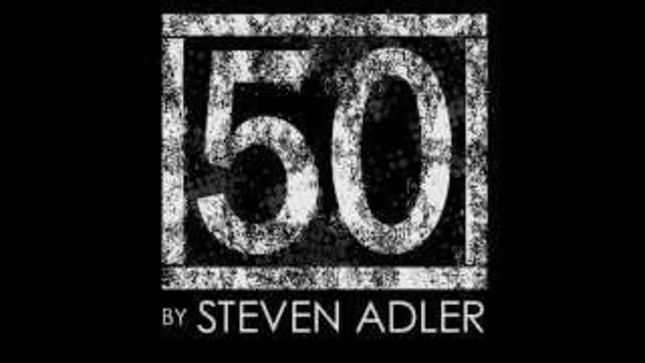 On January 22nd, drummer Steven Adler celebrated two important milestones - 30 years behind the drums and 50 years of life. As the founding drummer for Guns N' Roses, Adler is responsible for some of the most celebrated beats in hard rock history.

Utilizing the very rhythms that made him a legend, he'll unveil a collection of fine art "built" from the new medium of Rhythm-On-Canvas. Debuting on February 6th, those interested in learning more about the collection are encouraged to join the interest list at StevenAdlerArt.com.

Following is a new video clip featuring Adler talking about the collection. A previously posted clip is also available:

A project that has quietly been created over the last year in Los Angeles, Adler has been working exclusively with art team and publisher SceneFour on the collection entitled 50.

The process of creating artwork from rhythm is an extensive one that begins with the drummer utilizing a bevy of drumsticks that light in a variety of ways similar to that of a painter utilizing brushes with different colors.  In the creation process, the drummer is crafting rhythms that translate visually to abstract imagery before they are brought into the SceneFour studio, manipulated meticulously, and laid to canvas.

For Adler's visual work, SceneFour Co-Founder Ravi Dosaj states, "Steven's rhythms visually look like the way he sounds...dark, gritty, and they even swing. Inside his abstract work, there are elements that seem to connect to his life."

Steven and his critically acclaimed new band "Adler" are currently in the studio recording new material as well as confirming 2015 tour dates for both the US and overseas.