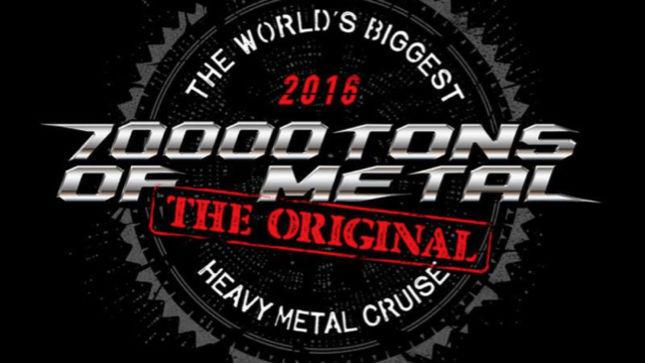 The organizers of 70000 Tons Of Metal recently confirmed the addition of Bloodbath to the cruise, followed by the announcement of nine more bands added to the roster: Paradise Lost, Vallenfyre, Krisiun, Subway To Sally, Squealer, Vader, Katatonia, Stratovarius and Panzer.

After five consecutive sellouts, 70000 Tons Of Metal, The Original, is gearing up for Round 6 of The World's Biggest Heavy Metal Cruise!

There are many Oceans and many ships, but 70000 Tons Of Metal always was and is the leading light of a new trend: They are truly The World's Biggest Heavy Metal Cruise. It's not enough that 70000 Tons Of Metal 2016 will sail on one of the biggest cruise liners on the planet, the 154,000ton Independence Of The Seas: On 70000 Tons Of Metal you get unrestricted festival access to all live shows on board, not just one show per band with assigned seating based on which cabin category you booked. On The World's Biggest Heavy Metal Cruise you can come and go to any and all events as you please. With 60 Bands on board you get access to 120 shows, 70000 Tons Of Karaoke until sunrise, as well as Clinics and Work-Shops with the musicians on board. Next year for the first time ever they are introducing #SuperMetalSunday: The last day of the cruise will coincide with the 2016 SuperBowl which will be screened live on board but it will also include Jamming In International Waters the 70000 Tons All Star Jam that makes Metal history year after year, their infamous Belly Flop Contest and the last night of 70000 Tons Of Karaoke in a very special, yet to be revealed location! Did we mention they have bars on board that never close? Yes, you heard right: They have bars on board that never close!

Two full days at sea and the opportunity to mingle side-by-side with your favorite artists on a floating luxury resort in the middle of the Caribbean. This event truly has no comparison and since there are no VIP areas it's like everyone has a backstage pass!

Moving The World's Biggest Heavy Metal Cruise to Royal Caribbean's Independence Of The Seas exemplifies 70000 Tons Of Metal's continued dedication to constant improvement and on board innovation. This cruise liner, the younger sister ship of the “Liberty Of The Seas” offers everything you could dream of having on your floating Heavy Metal Paradise including 4 Stages: The Alhambra Theater is a five-story concert hall in which they spare no expense to remove part of the (very comfortable) seating so you have a real Mosh Pit on the High Seas; The more intimate Egyptian themed Pyramid lounge offers the local club atmosphere; The third indoor stage is in Studio B, the ice skating rink featuring a maritime version of the Arena experience and last but not least their jewel: The Pool Deck stage - The World’s Biggest Open Air Stage Structure to ever sail the Open Seas, surrounded by multiple bars and pools, plenty of room to sunbathe on several decks and even hot tubs incorporated into the Pool Deck stage to soak in while you watch the shows! 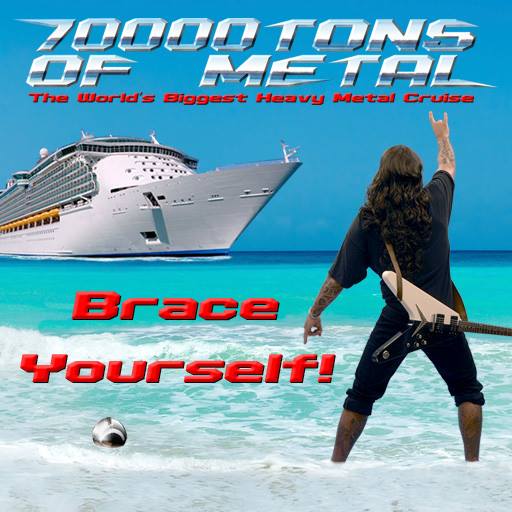 This year's sailors liked going to Jamaica so much that the organizers decided to go back. However, it wouldn't be 70000 Tons Of Metal if they were simply sailing to the same destination. Next year's port of call will be Falmouth, Jamaica which offers a wider range of shore excursions than ever before.

70000 Tons Of Metal, The World's Biggest Heavy Metal Cruise, will sail Thursday, February 4, 2016 aboard the Royal Caribbean Independence Of The Seas from Port Everglades in Fort Lauderdale near Miami, FL and will not return to the real world until Monday, February 8, 2016.

Ticket prices start at USD 666 plus USD 348 Taxes and Fees per person and include all on board entertainment, most non-alcoholic and non-carbonated beverages, all meals in the dining rooms, most on board restaurants and even 24 hour room service!