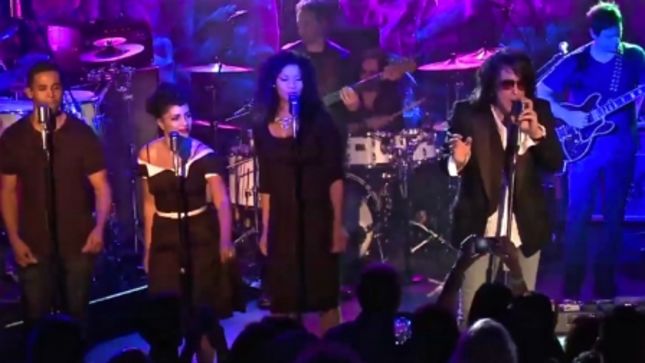 On February 26th, KISS frontman Paul Stanley performed with his new R&B/soul band, Soul Station, at The Coach House in San Juan Capistrano, CA. Fan-filmed video from the show can be viewed below.

Paul Stanley performed the first-ever Soul Station concert at The Roxy in West Hollywood last September 11th. He recently spoke with Rockcellar Magazine about the project, which draws from R&B/soul music hits of the ’60s and ’70s. An excerpt from the interview is available below.

Rockcellar: I saw that show at the Roxy and you were beaming with happiness. This project is truly a labor of love, more emphasis on the love and passion than labor. Joyous seems the right word to describe your immersion into this music.

Paul Stanley: "Yeah, that is the right word (laughing). Somebody said they haven’t seen me that happy. To be immersed in that music and to be part of making it and creating it is an incredible joy. I beam but so does everybody else on stage. We’re just having a ball. To hear this music played reverently and respectfully and accurately is great. These aren’t new interpretations; these aren’t new versions. We’re playing those songs with the intensity and intent that they had. And in many cases the people that originally made them can’t do that anymore."

Rockcellar: What are the greatest challenges you face in delivering this material in a live setting?