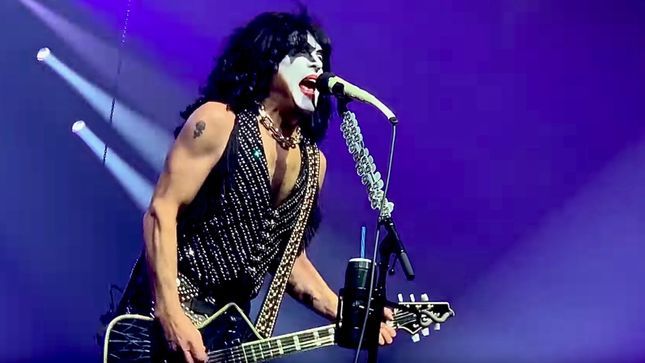 KISS frontman Paul Stanley spoke with New Hampshire Pulic Radio host David Greene about the beginnings of the band and their current End Of The Road farewell tour. Following is an excerpt from the interview.

Greene: How did you guys come up with the makeup and the characters?

Stanley: "Well, as a rock fan, I had gone to see bands who, oftentimes, made you think they were doing you a favor by showing up when I just paid them. I think there was a lot of apathy on stage and a sense of complacency."

Greene: Do you mean, like, you wanted to show your audiences that you were making this tremendous effort to perform for them?

Greene: You've talked about that in the early days, you really became someone different and would leave the stage or be off of tour and be very alone, like, it sounded like back to that little boy. And then over the years, that seemed to change. And you - I mean, that confidence like stayed with you, even when you were off the stage.

Stanley: "I don't think the confidence stayed with me. The false confidence or the confidence I was portraying got replaced with comfort with who I am. And I think that when you can let down all those defenses and accept yourself and realize that you're not that different than other people, that's where you build a total person."

According to Alternative Nation, SiriusXM host and "metal maestro", Eddie Trunk, recently shared a story on how a fan of KISS got a refund from Ticketmaster after he alleged that Paul Stanley was “not performing fully live.” Alternative Nation transcribed Trunk’s comments.

Trunk: "This is from Arch Hall, he writes: Maestro, curious to find out how many ticket buyers have requested a refund due to terrible performances. Back in the day I would recall many times venues refunding money for various reasons. With bands like KISS for example, Paul Stanley’s atrocious vocal performances would seriously upset me if I paid a substantial amount for a ticket and sit through some of the things I’ve seen uploaded to YouTube. It will be interesting to see if you could have a promotions person who dealt with customer complains in this area. To see if there are any that have actually requested their money back, it would be astounding if thousands would do it and the word got back to ticket suppliers and what was going on. I would pay good money to see that and his reaction.

"He calls me maestro, never been called maestro before Arch, thank you. Well Arch, look, as far as what’s going on, you’ve singled out KISS here but as far as what’s going on there it’s well documented and it’s all over YouTube. Constant examples and proof that Paul is singing to a track. He has a track assisting him in his live performance. All you gotta do is Google that, YouTube that and there’s a million – eventually they pull these videos down because they’re so incriminating but it’s been proven a thousand times online. So, he’s not gonna sound all that bad on this tour because he’s using a track!

"I know somebody in Boston, who I know very well who when he found out KISS was using a track and other bands were using fake tracks to supplement their live performance he request a refund and got it! I know a guy who spent a grand on four KISS tickets, in Boston, had never seen the band before, saw this stuff on YouTube that he wasn’t gonna get a full live performance, went to Ticketmaster and said “I paid for live, this not fully live, I want a refund”. Twenty four hours later Ticketmaster issued the refund, that is interesting. This person sent me an E-mail about it, this is a guy who is also in the business so this is not just a fan who is just trying to stir the pot."