PLACE VENDOME To Release Close To The Sun Album In February 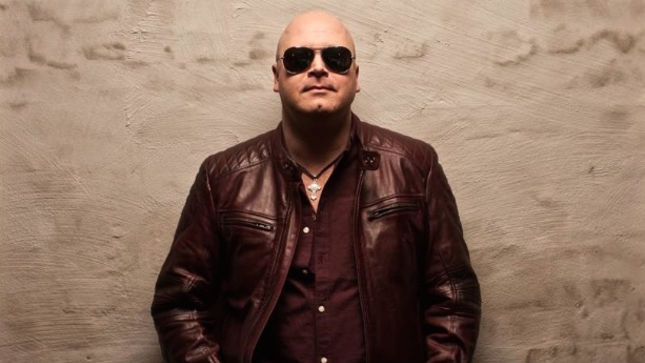 The new Place Vendome album, Close To The Sun, will be released on February 24th.

One of the most popular projects put together over the years by Frontiers' President Serafino Perugino, Place Vendome was an idea sparked during a phone conversation between Serafino and former Helloween singer Michael Kiske, where they discussed their common passion for several melodic rock giants of the 80’s. The Hamburg singer agreed to be part of a studio project where he would sign songs written especially for him by various writers with an AOR/melodic rock flavor.

The amazing reception of the first Place Vendome album released in 2005 planted the seeds for a second recording, Streets Of Fire, which was recorded during 2008 and for a third album, Thunder In The Distance, which was released in 2013. Being a project so close to Kiske’s heart, it was agreed during 2016 that work on a new album would start with his Unisonic  bandmate Dennis Ward at the production helm, as usual.

Of the album, Ward said, "Upon receiving the demos for the new songs intended for the new Place Vendome record I was a bit concerned because a few vocal styles seemed to go against what Michael Kiske is known for vocally. After talking together we agreed to just let the melodies come out naturally, without trying to imitate or “reproduce” the demos. Michael really stood up to this on the new album. He did “his” thing, with no compromises. He managed to make the songs his own and brought all the songs to another level. I have a lot of respect for him because of this and now the album is much more than just another AOR album. That being said I have to pay high respects to the other musicians on the album: Dirk Bruineberg proved again that he is a multi-talented drummer that can literally pull of any groove, any style of any era with the highest of expectations. Günter Werno is also a gem amongst a pile of stones. He really shines on this album and holds all the songs together, true to the Place Vendome sound. Uwe Reitenauer is also a master of his instrument taking over duties that were critical and complicated to say the least. He has the perfect AOR tone and can implement it no matter what type of song you throw at him. The rest of the “guests" that helped out made this album into a truly interesting compilation and also making this a milestone for Place Vendome. That being said, it’s the first Place Vendome album where I feel that we have achieved our trademark sound. This is how we want to be heard and this is how we imagine ourselves to sound."

Speaking of other album guests, once again, Magnus Karlsson (Primal Fear) was one of the first to answer the call to participate and offered the awesome song, “Falling Star” to the project. Jani Liimatainen (Cain's Offering, ex-Sonata Arctica) was the next contributor with the epic “Welcome To The Edge”, the album’s tour de force. Following Labyrinth’s reunion, guitarist Olaf Thorsen sat with Eternal Idol, Angra and Rhapsody singer Fabio Lione and offered “Helen” and “Riding The Ghost”. Frontiers’ President Serafino Perugino then proposed that his favourite DGM song, “Hereafter” be included. This brought DGM’s main composer, Simone Mularoni into the picture and he wrote the album’s title track and “Across The Times”. Alessandro Del Vecchio also offered two new songs, “Strong” and “Yesterday Is Gone”, while Secret Sphere’s guitarist Aldo LoNobile wrote “Distant Skies” and “Breathing”. The full picture was finally completed with a new song written by Swedish melodic rock artist Michael Palace (Palace, Skylander), “Light Before The Dark”.

Kiske comments: “The production with my buddy Dennis was great, as always, but what I especially like about this album - beside the new microphone I used that Dennis has built me - is the various styles of the songs. It is all a still very AOR-produced album, but we also have progressive or ''wilder'' elements here and there. It was (again) interesting to see how much the songs change until you finally reach the mixing stage.”

In a year that will see Michael Kiske rejoin with his old Helloween bandmates for a unique world tour, Place Vendome’s new album is the icing on the cake of a special and very rewarding period for the German singer.

All in all, Close To The Sun is probably the most hard rocking release ever from Place Vendome and an absolute monster of an album!

Close To The Sun tracklisting: