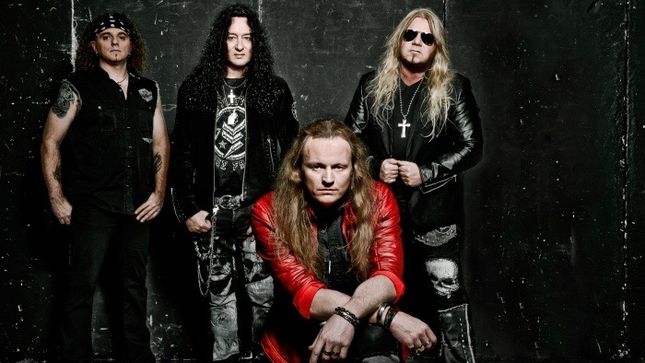 Primal Fear guitarist Alexander Beyrodt (second from left) has checked in with the following update:

"Working on new Voodoo Circle songs. I am so busy these days I hardly find time to write new music, but today I woke up and had this feeling, this urge, I needed to write. And so far... very pleased with the result. For the next album I have a special vision and I need to dig deep inside my soul to find those feelings and put them into a song, a riff, a sound. I don’t want to write without passion, to deliver songs with no soul, no feel, no love for details. So please bear with me and allow me more time so I can say after the release : I did my very best!"

"Top 50 chart entry! Raised On Rock hit the Official German Album Charts on #43. This is the biggest success in the band's history and the band's most succesfull album so far. Thanks for making this happen to all our supporters, fans and partners. At the end, loyalty and hard work pays back! Personally, this means a lot more to me than you may think. I also want to thank Maybach Guitars, Marshall Amps, Richter Straps, Pyramid Strings, Eternal Rock Music Agency and AFM Records. And of course to my babygirl who always has my back, no matter what happens!"

If you consider the songs on Raised On Rock to be an indicator of the current emotional condition their most important protagonists find themselves in, there seems to be no reason to worry about band founder, guitarist and main composer Alex Beyrodt in particular. Thanks to Beyrodt’s excellent songwriting - as usual inspired by renowned sources such as Whitesnake, Rainbow, Deep Purple, Led Zeppelin and Jimi Hendrix - and his outstanding guitar performance which brings to mind icons from Ritchie Blackmore through Jimmy Page to John Sykes, this recording oozes pure, unadulterated fervour.

This exuberant energy, however, isn’t the merit of Beyrodt alone but, without doubt, also that of his colleagues Mat Sinner (bass), Francesco Jovino (drums) and - last but not least - new vocalist Herbie Langhans (Avantasia). Beyrodt and Langhans met in 2015 at the Wacken Open Air, when they belted out the Wacken anthem together from the gigantic Black Stage.

Beyrodt: “The amazing thing about this story is that Herbie and I had never met before but talked to each other in person for the very first time after we’d rocked only minutes earlier the 100,000 people in front of the stage and around four million viewers in front of their TV sets.”

With Langhans as the group’s new frontman, the stylistic direction of the Voodoo Circle compositions hasn’t significantly changed - unlike the general flair of the material: “I feel that the band sounds even more autonomous, a little less bluesy and much meatier with Herbie at the mic,” Beyrodt enthuses. “This allowed me to work on ideas which would probably not really have suited his predecessor David Readman but are absolutely perfect for Herbie’s powerful voice.”

The Voodoo Circle boss is referring to numbers such as "Running Away From Love", with its anthemic vocal melody and the subsequent mid-tempo rock track "Higher Love", which went down a treat with the audience at its official live debut.

Beyrodt: “In the beginning, the song caused me a number of sleepless nights because I felt that there was still one small, all-important element missing. Then I came up with the idea of the talk box, which lends it a different, very interesting note. To me, 'Higher Love' in its current form is one of the best Voodoo Circle numbers of all time.”

The almost six-and-a-half-minute "Dreamchaser", with its Blackmore references dates back to the very early days of the group. Beyrodt had originally composed it for the 2008 Voodoo Circle debut album but wasn’t entirely satisfied with the result at the time.

“The arrangement of the number was changed and overhauled repeatedly over the years, now it’s matured to the point where it was ready for recording.”

"You Promised Me Heaven" sees Beyrodt delve deep into the Page/Sykes bag of tricks, a veritable guitar festival featuring Telecaster, Strat and Les Paul sounds which support the bluesy feel of the track, adding even greater depth.

Talking of the sound: Raised On Rock was mixed and mastered by Jacob Hansen (Volbeat, U.D.O.), whose unerring instinct for dynamics and frequencies lends the recording its modern touch. And another musician contributed significantly to the tight overall impression of Raised On Rock: the keyboards were manned by Corvin Bahn (Saxon, Uli Jon Roth). So all in all, we can say that the new Voodoo Circle album truly lives up to its programmatic title.

"Running Away From Love":