QUEENSRŸCHE Guitarist MICHAEL WILTON On TODD LA TORRE Replacing GEOFF TATE - "It's Not Easy When You've Got Such Hardcore Fans, But He's Won So Many People Over" 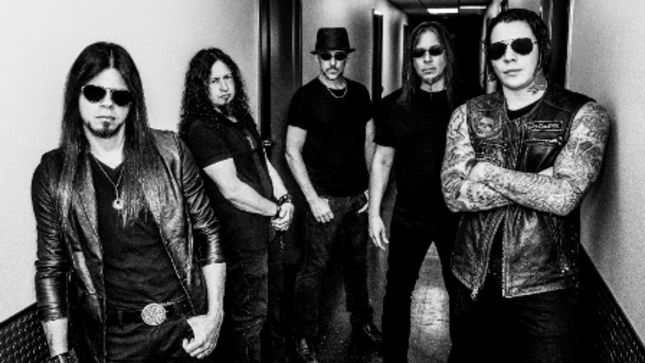 In the clip below, founding Queensrÿche member Michael Wilton (guitars) joins hosts Clint Switzer and Paul Lagana on the Music Mania odcast to discuss the band's latest album and tour as well as the circumstances that led to former singer Geoff Tate's exit from the band back in 2012.

Queensrÿche, have announced their next headlining tour throughout the United States. The month long trek will take place this fall, starting on November 15th in Seattle, WA and concluding on December 15th in Colorado Springs, CO.

Queensrÿche will be joined by the iconic Armored Saint as direct support, along with Midnight Eternal on all dates for the upcoming tour. The band continues to perform across the world on the strength of their latest full length album, Condition Human, which was released in October (2015). Dates for the fall headlining tour can be found below.

Speaking about the upcoming US tour and playing with Armored Saint, Queensrÿche vocalist Todd La Torre comments: “We are pleased to announce that we will be hitting the road this November with the one and only Armored Saint and Midnight Eternal. We're looking forward to seeing all of you for this great billing of musical diversity and high energy performances! Come join the Ryche this November - December!"

Lead guitarist and founding member Michael Wilton also gave his thoughts on the band's fall dates, saying: “Queensrÿche is proud to be embarking on our fall 2016 - Condition Human US tour with special guests Armored Saint and Midnight Eternal! We encourage our fans to come out for this one and prepare yourselves for some high energy rock shows!"