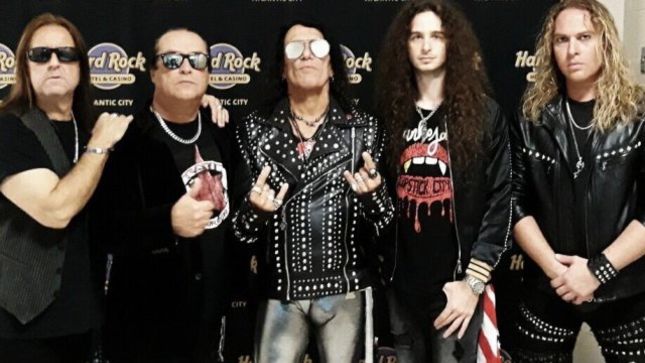 "We've all kind of been writing on our own," Ziff says regarding Ratt, "because we haven't really had a lot of time to get together and do some writing together. Come January, we have some time off, so we're all going to get together and write some stuff and put out a few singles. That's kind of what we're looking to do; not a full album, just do track-by-track. We don't need to sit and spend a million years trying to do a whole album when, at the end of the day, it's just like, 'Let's just write a good song, put it out, write another good song, put it out.' I feel like that's the best way to do it these days anyway... I have some song structures. I know Juan (Croucier / bass) does, I know Stephen (Pearcy / vocals) does. It's all about just getting in a room and seeing what totally clicks with all of us jamming together."

Ratt frontman Stephen Pearcy will be inducted into the 2020 Metal Hall Fame at its annual non-profit charity gala, The Hall Of Heavy Metal History. The gala will take place today (Wednesday, January 15th) at the Marriott Delta Garden Grove in Anaheim, CA.

Stephen Pearcy will join 2020 gala Inductees Don Dokken, Joe Satriani, and Geoff Tate, amongst other iconic hard rock and heavy metal artist-inductees who will soon be announced. Pearcy is best known as the original vocalist and founding member of the iconic rock band Ratt, which has sold millions of gold and platinum albums. He has recorded five solo records, and is also a producer, composer, and television program creator.

The 2020 gala will be hosted by iconic television and radio personality Eddie Trunk, and will feature additional Inductions and performances by numerous hard rock and heavy metal legends of all time, an All-Star Jam, and other surprises.

Proceeds from the event go to bring free music programs and therapy services to disabled children in various hospitals and community centers throughout the United States.

Pat Gesualdo, Metal Hall of Fame Founder/CEO, says, “The 2020 Hall Of Heavy Metal History Gala is going to be amazing! Our entire Board of Directors want to thank metal fans all over the world who vote for our inductees, and attend our events. With their support, they are helping us keep hard rock and heavy metal alive for generations to come. At the same time, the gala helps our non profit organization D.A.D. (Drums and Disabilities), to provide free therapy services for disabled children and their families, in hospitals and community centers throughout the United States."