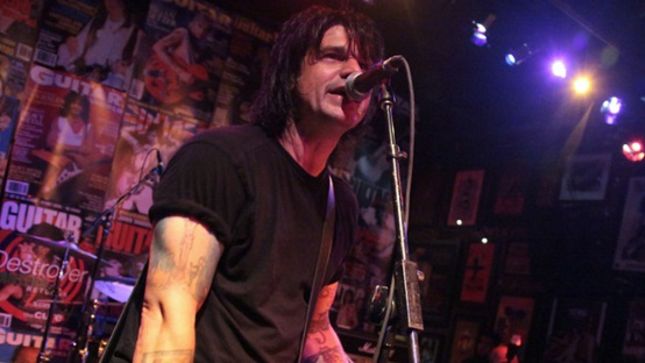 In episode 82 of The Double Stop, Brian is joined by bassist Anthony Esposito (Red Dragon Cartel, Ace Frehley, Lynch Mob). He discusses his career, from his early start in music to his time in Lynch Mob and Ace Frehley’s band. He also discusses his new gig in Red Dragon Cartel, and gives us an update on the recording of the new album (a return to Jake E Lee’s Badlands style).

On the plans for the new Red Dragon Cartel album: “Do it old school. Write it old school. Jam in a room and come up with the parts. And do it like he used to do it in Badlands."

On prepping the Ace Frehley’s Anomaly album: “He (Ace) had been playing me recorded licks that he had on various digital recorders. And I helped him piece them together. He had all the ideas - I really didn't write anything - just a matter of being his brain and helping him organize."

On his history with George Lynch: "It's been a mess since ‘93 or ‘94 when I quit (Lynch Mob). Every time I've gone back it's gotten worse and worse."

On a new episode of The KISS Room podcast, Esposito addressed the recent comments by George Lynch claiming that he had gotten a text from Esposito threatening to “bust in” George’s “skull with a pipe and kill him.”

“I heard the show on Eddie Trunk. They were totally going at me, I wasn’t able to defend myself. It wasn’t about the money, although the money thing is screwed up and George has been screwing me for 25 years. I was doing a meet and greet in Osaka and a Japanese fan hands me a copy of Wicked Sensation (Lynch Mob’s first album) to sign. I look at it and the colors of the album cover CD booklet were off. So I was like ‘Is this a bootleg? What is this?’ So I open it up and it’s this 16 page booklet of just pictures of Oni (Logan, Lynch Mob vocalist) and George. They took off all the pictures of me and Mick (Brown, Lynch Mob drummer) from the album. It’s a whole new booklet with a ten page interview with linear notes by George…I mean it’s like if you bought a remastered copy of Love Gun and there was no Ace and Peter (Criss, KISS drummer) in the pictures and it was just Gene (Simmons, KISS bassist) and Paul (Stanley, KISS guitarist), you don’t think Ace would be pissed off if he had to sign it? So he’s trying to diminish my input of that album, which everything was split equally, everything was written equally, and I was pissed and I fired off that text in a moment of pissed off anger which any musician part of a great album like that would feel.”

Listen to the whole conversation below: