Report: ACE FREHLEY's Girlfriend Gets Restraining Order After "Bizarre And Frightening Incident" At House She Shares With Original KISS Guitarist 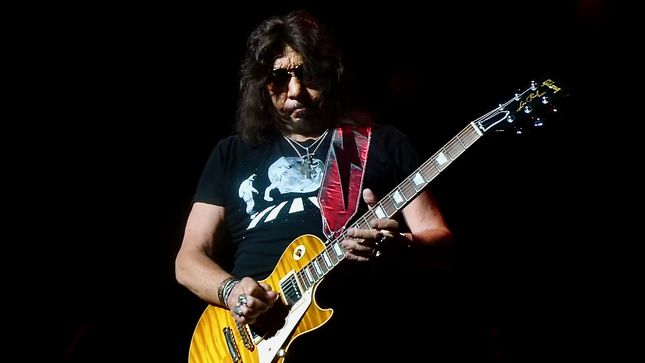 TMZ is reporting that original KISS guitarist, Ace Frehley, stormed into the home he shares with his longtime girlfriend, forcefully took his belongings, then left her high and dry... so she claims in legal docs.

Says TMZ: "Rachael Gordon was granted a temporary restraining order against Ace - who she says she's been with for 11 years - after what sounds like a bizarre and frightening incident at their house. She claims in the docs, he returned home from a business trip unannounced and barged in with muscle - a male and a female bodyguard - along with his daughter, Monique.

"The Rock & Roll Hall of Famer allegedly refused to talk to Gordon as he went into his office to gather up his guitars and gold records. Rachael says the female guard threatened her with physical violence and Monique screamed at her... 'You are a skank. My family will kill you.'

"According to the docs... Gordon claims as quickly as they stormed in, Ace and his crew took off, leaving her 'in shock, afraid, filled with anxiety' and 'paralyzed with fear.'

"A friend of Rachael's witnessed the alleged incident, and claims in docs .. Frehley, Monique and the security guards 'looked like they were on drugs.'"

Read the full report at TMZ.com.