Report: IRON MAIDEN-Laden Feature Film The Night Of The Beast Picked Up By M-Appeal 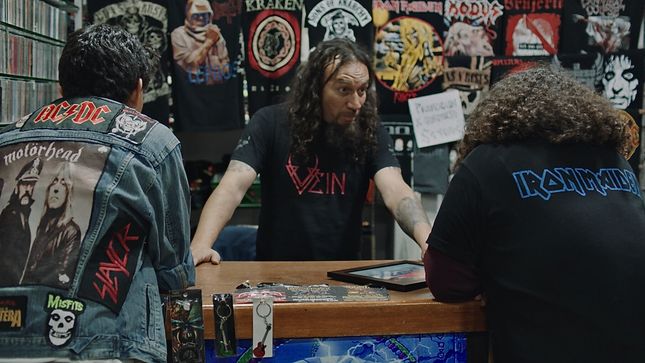 Variety is exclusively reporting that Berlin-based sales outfit, M-Appeal, has acquired Colombian film The Night Of The Beast, produced by Fidelio Films and directed by Mauricio Leiva-Cock - the emerging showrunner behind Netflix’s Green Frontier and Movistar’s Capital Noise.

Leiva-Cock’s debut feature, The Night Of The Beast, is an urban road trip that follows two Bogota teenagers trying to get into the first Iron Maiden concert in Colombia, a historic event that had been awaited for three decades by fans of the metal band which eventually came to pass in 2008 in the Colombian capital. Metalheads of all ages pawned their instruments and saved for months to get the tickets.

Still in post-production, the film features a soundtrack of songs from Iron Maiden such as “Aces High” and “The Trooper” alongside Colombian metal bands like Vein, Agony, Masacre, Darkness, La Pestilencia and others.

Vargas and Chuki, the lead characters, cross the city in what comes across as a very loving portrait of Bogotá that embraces both its beauty and harshness. This is a sincere comedy about friendship that proposes new narratives diverging from stories the world has come to expect from Colombian cinema.