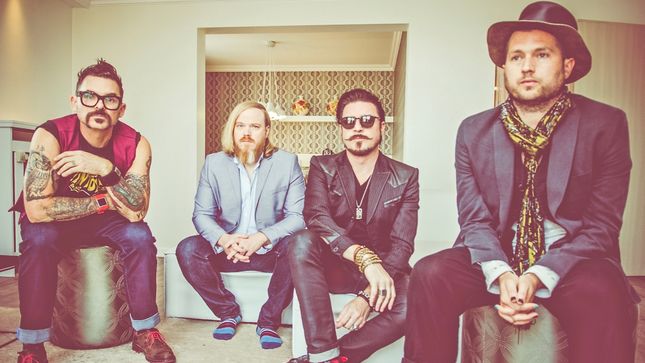 Rival Sons, the blistering, soulful Long Beach, CA rock and roll band who’ve previously released four albums on the British UK label, Earache Records, has moved onward and upward, signing a deal with Low Country Sound / Atlantic Records. The band, who many feel is the one most likely to lead rock and roll’s resurgence in 2018, has been hunkered down in the historic RCA Studio A in Nashville with Grammy award winning producer, Dave Cobb for a release later this year.

Pete Ganbarg, President of A&R at Atlantic Records commented, “We are thrilled to welcome Rival Sons to the Low Country Sound/Atlantic family. I've been a fan of theirs ever since my colleague Lea Pisacane came back from their Madison Square Garden show with Black Sabbath a few years back raving about how great they were. Having gotten a chance to really to get know the guys and work with them in the studio, I know that people are going to be blown away by their label debut. And to get to work together on this with Dave Cobb, producing them for his Low Country Sound label, is an absolute treat."

The band has also announced a short run of tour dates this May to bookend their appearance at Shaky Knees festival, their first in the US in over a year. Tickets go on sale this Friday at 10 AM, with a special pre-sale on Wednesday for email subscribers. For tickets and more information, visit rivalsons.com.