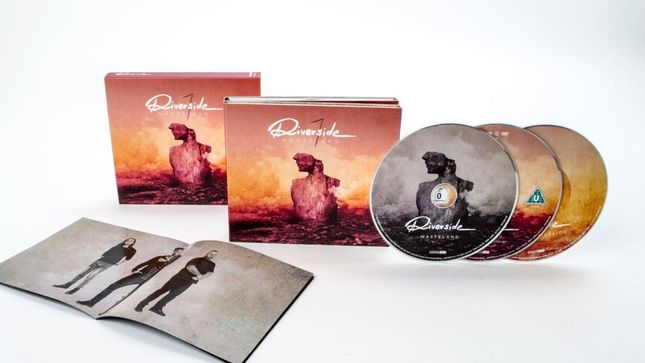 Polish progressive rock masters, Riverside, will be releasing a special edition 2CD+DVD version of the Wasteland album on November 29 via InsideOutMusic. In order to promote this upcoming release, a new video clip directed by Tomasz Pulsakowski / Sightsphere & Animatic is being launched today (see below).

Riverside checked in with the following comment: “We’re coming closer to the big finale of our Wasteland adventure. The surround edition of the album with a bonus Acoustic Session EP will be out very soon, and the final concerts of the Wasteland Tour have already been announced for March and April 2020. But let’s start with the new clip to our title composition, created by our friends from Sightsphere. 'Wasteland' is without a doubt one of our most important releases, thanks to which the band was born again. We’d like to thank all of you who have made it possible.“

The Wasteland - Hi-Res Stereo and Surround Mix 2CD+DVD (as pictured above) will come as digipak format with slipcase and includes a DVD bonus disc of Wasteland as Hi-Res Stereo 24bit version and as Surround Mix (4.1), plus 3 video clips. This special edition also contains 5 previously unreleased acoustic tracks/versions on a separate CD.

CD 1 - Wasteland album:
"The Day After"
"Acid Rain"
"Vale Of Tears"
"Guardian Angel"
"Lament"
"The Struggle For Survival"
"River Down Below"
"Wasteland"
"The Night Before"

The five previously unreleased acoustic tracks/versions of the Acoustic Session will also made available as separate Digital EP on November 29 as well. The pre-order for both upcoming Riverside releases starts today...

Or order Wasteland in its various formats here.