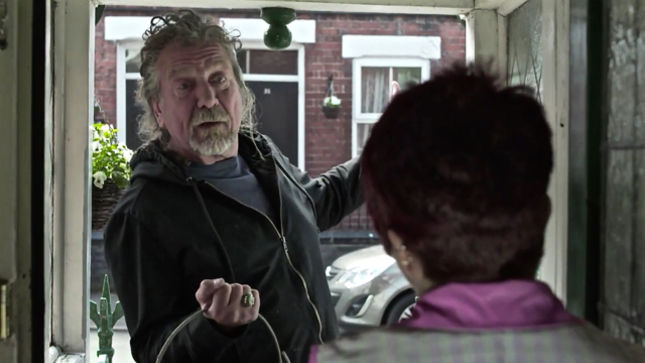 Led Zeppelin legend Robert Plant will make a cameo appearance in the upcoming indie comedy, Doreen: The Movie. A trailer featuring Plant can be seen below.

Says BirminghamMail.co.uk: Look who’s knocking on our Doreen’s door – it’s only Robert Plant! The Led Zeppelin frontman seems to have developed a new sideline of Tarmacing drives, under the name Plant Hire: Your Driveway To Heaven.

The singer songwriter from West Bromwich makes a cameo appearance in the forthcoming Doreen: The Movie, based on the life of the Birmingham Mail columnist.

Doreen Tipton, the world famous Lazy Cow from the Black Country, began as a comedy creation who went viral on YouTube. Then Doreen, played by actress Gill Jordan, became the star of her own stage show, had her biography written and is now the star of the big screen in a film coming to cinemas in October.

This clip from the movie sees Robert Plant knocking on Doreen’s door and it’s answered by her next-door-neighbour and all-round skivvy Doris.

Robert, 66, says: “Good afternoon madam. I just happen to have outside a truck with half a load of Tarmacadam. Would you care for a little bitumen slapped up your alley? A small amount of Tarmac for your drive?”

Doreen asks if he wants money, to which he replies: “I’m quite solvent at the moment but I could do with a little bit, a pinch here and there for some apple juice.”

To which Doreen says: “Tell him to bugger off.”

Faced with a slammed door, Robert cries: “I’m distressed by this, I have a full hot bucket. This is the finest bitumen in the land, from Tividale. There must be an easier way to make ends meet.”

He pushes a card through the letterbox with Plant Hire, Your Driveway to Heaven on it.

Doreen: The Movie will be screening in and around the Black Country from October 17th.