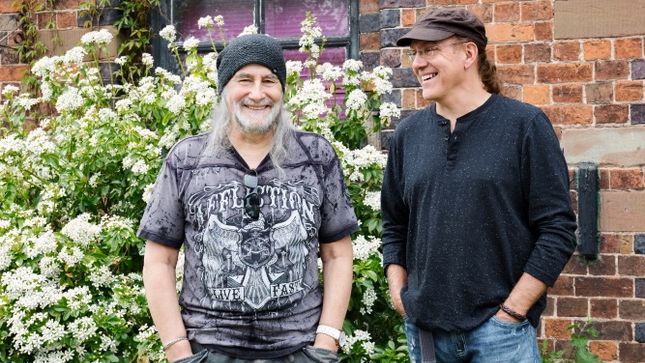 Having illustrated over 140 rock album covers Matthews knew who to call upon to play across the ten eclectic tracks composed and arranged by himself, Scheetz, Wakeman and TV/film composer and multi-instrumentalist Pete Coleman. The stellar lineup also includes none other than legendary Yes keyboardist Rick Wakeman on the title track, three bass players - Asia FJP’s John Payne, Magnum’s Tony Clarkin and in-demand jazz/blues/rock session player Steve Amadeo - and world class saxophonist Charles McNeal, plus vocals by Sarah Prothero and narration by Mark A. Williams.

The distinctive styles and diversity of contributions from these musicians lends perfectly to the largely instrumental album, encapsulating in music, images both familiar and new, from the thunderous "Heavy Metal Hero" and dramatic "Night On The Bare Mountain" to the majestic "Mirador" and ethereal "Trinity"(and everything in-between).

The album will be available on CD and double vinyl with bonus tracks. Also, for collectors, both will be included in a lavish limited-edition boxed set, accompanied by Matthews’ illustrated guide to the artwork, two giclée prints and a set of eleven postcards.

Of the album, many years in the making, Matthews says: “I’ve waited all my life to record an album, to do so with this group of high calibre musicians was beyond my wildest dreams - and trust me, being a fantasy artist, I can dream pretty wild!”

Out in February 2020, the album is now available for pre-order at the Trinity album website here, or on vinyl via Diggers Factory, here.