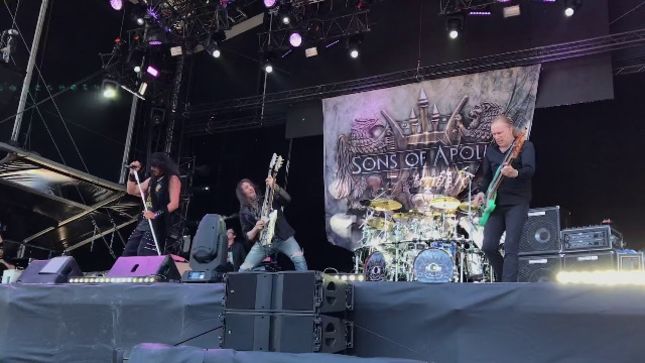 Guitarist Ron "Bumblefoot" Thal recently guested on the Meltdown podcast and discussed a hots of topics including a two-piece band from Israel that he's working with, guitarists that influenced him along with a killer Ace Frehley story. He also goes through his tour itinerary, Sons Of Apollo's new album, hot sauce and everything in between.

On the new Sons Of Apollo album, which is currently in the works:

"To me, it sounds pretty much like the first album. So it's, you know, great playing, bad songs (laughs). It's similar, yeah. It's got some catchier songs, got some crazy, more progressive songs, a whole lot of keyboards and guitars. And Jeff (Scott Soto / vocals) sounds amazing, Mike (Portnoy / drums) of course, sounds amazing, Billy (Sheehan / bass) is just all the balls in the music in there.

We spent eight days in Mike's house writing music and sort of demoing it out, and then Mike went out to California and at the same place we recorded the first album. He did the drums there, and then when those were done he laid his parts. Unfortunately, this time we couldn't do it in the same room; the schedules weren't allowing for it, so we had no choice but to do it all in pieces. So, he laid his drums and I laid my guitars and Derek (Sherinian) laid his keyboards to it, Jeff did his vocals at his place and the wonderful Jay Rustin is mixing..."

Ron ‘Bumblefoot’ Thal is an award-winning vocalist, songwriter, producer, and world-renowned guitar virtuoso, with over 25 years of releasing music, playing international festivals and headlining tours, and gracing magazine covers as a solo artist.

He has just announced dates and details for his first ever South African tour where he will be hosting two Master Classes (Cape Town and Johannesburg) as well as a full band show in Cape Town.