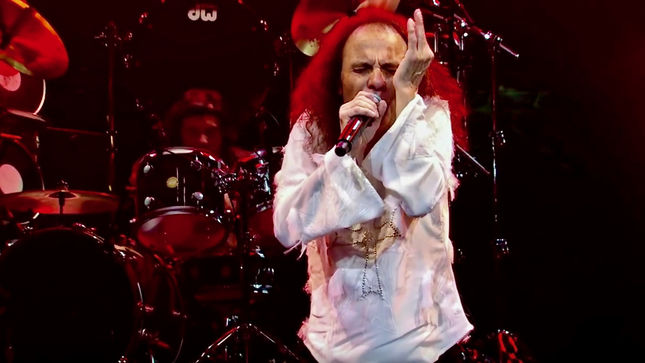 This Friday, October 6th marks the third annual Bowl For Ronnie Celebrity Bowling Tournament, benefiting the Ronnie James Dio Stand Up and Shout Cancer Fund (diocancerfund.org). Taking place at Pinz Bowling Center in Studio City, CA, the event aims to raise more funds to benefit cancer research and education - last year's Bowl For Ronnie brought in $36,500 for the cancer charity, which is now in its eighth year of raising awareness and much-needed funding for cancer research.

Would you like to bowl for a great cause alongside your favorite rockers?

Bowl For Ronnie is giving fans a chance to bid for a spot on one of this year's competing teams. The teams available to join are captained by drive time deejay Gary Moore and Stew Herrera of Los Angeles' rock radio station KLOS, and event host and renowned heavy metal personality/DJ Eddie Trunk, whose team took the top prize trophy last year. Bid for your chance to win a spot on Team KLOS here, or Team Eddie Trunk here. In addition to bowling with rockers, each package includes red carpet entry and access to the VIP pre-party. All funds raised will benefit the Ronnie James Dio Stand Up and Shout Cancer Fund. Hurry, bidding for the KLOS lane ends on Wednesday at 6:30PM PT and Eddie Trunk's lane ends on Wednesday at 7 PM PT!

Bowling and Bingo, two of the world's oldest pastimes. The earliest known forms of bowling date back to ancient Egypt, with balls made out of the husks of grains covered in leather. Whereas the roots of Bingo date back to Italy in the 1500s and a French game Le Lotto which appeared in 1778. In the early 1920s, Hugh J. Ward created and standardized the game, copyrighted it and published a rule book in 1933. For more Bingo excitement please visit Bingo Promo Codes.

Bowl For Ronnie participants can anticipate an evening of fun, food, and, of course, bowling with rockers and celebrities competing for trophies in the name of raising funds and awareness for the Dio Cancer Fund.  In addition to the celebrity bowling tournament, there will be several raffle drawings for a variety of items, among them a wine basket, tickets to the 2018 Ride For Ronnie, and specially-designed bowling balls and bowling pins featuring the Bowl For Ronnie artwork. In addition, the host venue, Pinz Bowling Center, has donated a raffle prize of a Pinz VIP Experience Bowling Party valued at $600, comprising two lanes for two hours each plus shoes for up to 10 guests and two hours in the VIP room.

The event kicks off at 6:30 PM with open bowling and a VIP pre-party for lane sponsors, celebrities and their guests. Celebrity bowling will commence at 9 PM, with fierce competition for a variety of trophies.

In addition to competing with his team, radio personality Eddie Trunk will once again host the event. 100% of the net proceeds from the Bowl For Ronnie will go to the Dio Cancer Fund. Individual tickets and lane sponsorships are now on sale, and participants are encouraged to gather friends, family and co-workers for the ultimate bowling team. The Pinz Bowling Center is located at 12655 Ventura Blvd in Studio City, California.

Tickets are now on sale at this location.