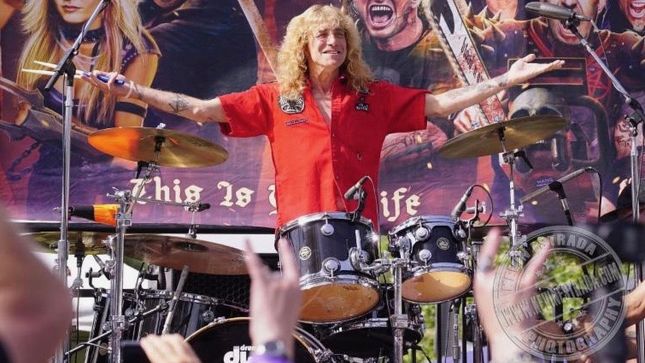 As some 300 motorcycle riders and passengers arrived at Los Encinos Park on Sunday, May 6th after completing the motorcycle ride from Harley Davidson in Glendale, a rainbow appeared in the sunny, blue, but cloudy sky. Rainbows have long been associated with Ronnie James Dio and his music, and the colorful presence seemed to signal the late singer's approval of the event created in his memory.

Harleys, heavy metal and gambling. It's a match made in "heaven and hell"! With luck on your side, you could find your pot of gold at the end of a "rainbow". Your "neon knights" are just a click or a tap away! Get your fill at the Best Slot Sites.

The afternoon of live music following the Ride, hoste dby radio and television personality Eddie Trunk who was joined by KLOS' Melissa Maxx, kicked off with Long Beach, CA hard-rockers Railgun. They were followed by the very first live performance by Classless Act, formed by childhood friends Nico Tsangaris on lead guitar and drummer London Hudson, the 15-year old son of guitar god Slash. They performed their version of Black Sabbath's "The Mob Rules" in honor of Ronnie James Dio who wrote the song.

The 10-piece Lynyrd Skynyrd tribute band One More From The Road entertained the crowd with an array of Skynyrd classics, among them "That Smell" and "Free Bird." A live auction for a guitar signed by Artemis Pyle of the real Skynyrd band along with handwritten and signed lyrics to "Free Bird" and a signed photo were auctioned off immediately after their set. Also auctioned in between sets during the afternoon were Wendy Dio's now-famous pink leather motorcycle jacket, a Heaven & Hell denim jacket with silver studs, a 2016 numbered limited edition Black Sabbath "End Tour" book, Scorpions' and Iron Maiden packages and other collectibles.

The bands held Meet and Greets for fans during the course of the afternoon, and a raffle and music memorabilia heavy silent auction brought in additional donations. The silent auction included an Elton John Tour Program, a signed "Heavy Metal Hall of Fame" poster, a KISS Waffle Maker and a full Pantera discography on vinyl among many other items.

Wendy Dio and Dio Cancer Fund Medical Director Dr. Sandy Kapoor presented a check for $25,000 to Dr. David Wong of the UCLA School of Dentistry to further his team's research into the development of a simple, non-invasive saliva test for the early detection of cancer. Dr. Wong surprised the crowd with the news that an early form of this test will be available some time this summer.

The Ronnie James Dio Stand Up and Shout Cancer Fund (www.diocancerfund.org) was formed in memory of the legendary rock singer Ronnie James Dio, who lost his life to gastric cancer in 2010. A privately funded 501(c)(3) public charity, the Ronnie James Dio Stand Up and Shout Cancer Fund has already raised over $2 million since its inception. Monies raised have been committed to the cancer research work of the T. J. Martell Foundation for Cancer, AIDS and Leukemia Research, the gastric cancer research unit of the M.D. Anderson Cancer Center in Houston, where Ronnie was treated for gastric cancer during the last six months of his life, and other cancer research projects. Most recently, the Dio Cancer Fund has committed funds to support the research of Dr. David Wong and his team at the UCLA School of Dentistry in developing a simple, non-invasive saliva test for the early detection of cancer, which is in keeping with the Fund's mission of cancer prevention, research and education.