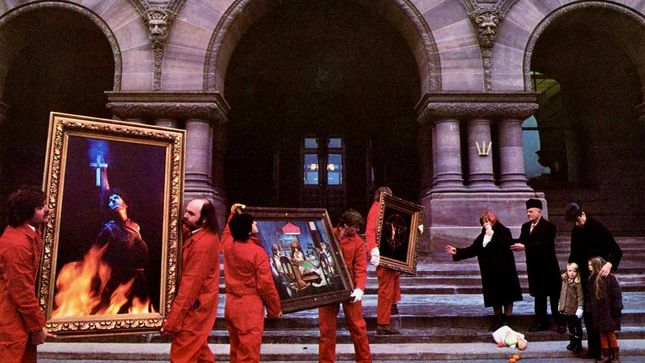 "A lot of times Rush wasn’t ready to send me music," said Syme, who has an exhibition of images on display through February 21 at Renditions Fine Art, Framing & Photography near the intersection of Binford Boulevard and 71st Street.

"Neil would send me lyrics, or he would send me the album title. When I heard Moving Pictures, I said, ‘We’re going to have some guys moving pictures.’ Without question, I knew that immediately."

The cover of Moving Pictures - the 1981 album known for signature songs "Tom Sawyer" and "Limelight" - depicts men carrying fine art outside a government building in Toronto as well as mourners weeping near the "moving" scene.

Syme said the members of Rush also showed a sense of humor when approving his idea for 1982's Signals: a photo of a Dalmatian sniffing a fire hydrant.

And Syme painted a young man pointing a remote control toward a window in a house for the cover of 1985 Rush album, Power Windows.

On December 14, the Renditions gallery will host a book-signing event with Syme. Copies of Syme's 272-page book, Art Of Rush, will be available for purchase.