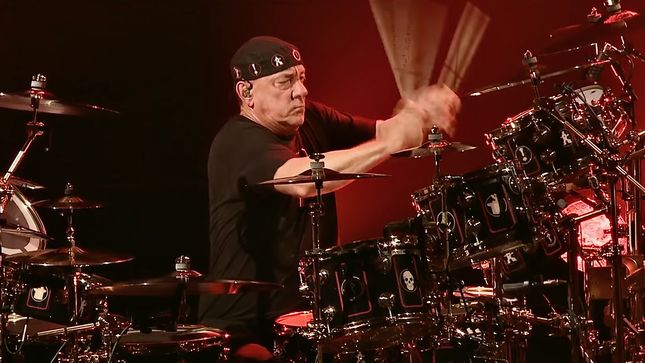 Billboard is reporting that in the days following the death of Rush drummer Neil Peart, who passed away on January 7 after a three-year battle with brain cancer (glioblastoma), streams of the band’s songs surged by 776% in the US, according to initial reports to Nielsen Music/MRC Data.

In related news, following Peart's death, the band dominates Billboard's LyricFind US and LyricFind Global charts dated January 18, led by "Tom Sawyer", which bows at #1 on both lists.

The band infuses 23 of the 25 positions on the Global survey and 18 of the 25 spots on the US ranking.

The LyricFind Global and LyricFind US charts rank the fastest-momentum-gaining tracks in lyric-search queries and usages globally and in the U.S., respectively, provided by LyricFind. The Global chart includes queries from all countries, including the US. The company is the world's leader in licensed lyrics, with data provided by more than 5,000 publishers and utilized by more than 100 services, including Amazon, Pandora, Deezer, Microsoft, SoundHound and iHeartRadio. The latest tracking week ended January 12.

Rush songs occupy the top six of the LyricFind Global tally, paced by "Tom Sawyer", which earned a 2,480% boost in lyric views, according to LyricFind, following the news of Peart's passing.