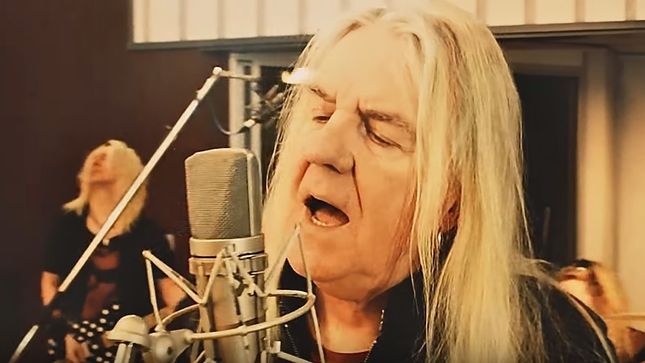 Saxon frontman, Biff Byford, has released a new music video and single, "Me And You". Watch the clip below.

“Happy Valentine’s Day,” announces Biff, “I wrote this song for my wife and our 25th anniversary but I think it can be for anybody who’s in a relationship. We all have anniversaries and memories, not my usual style of song but it’s always good to throw in a curve ball!”

Taken from Byford’s upcoming first solo album, School Of Hard Knocks, set for release 21.02.20 via Silver Lining Music, "Me And You" is also now available as a 7” single, get your copy here.

School Of Hard Knocks is available for pre-order on CD, vinyl, digital formats and special D2C bundles at this location.

With his roots firmly in The North of England, Biff has earned the right to be considered The Heavy Metal Bard Of The North and his debut album reflects the man and his personality, his loves and his musical versatility.

School Of Hard Knocks fulfils Biff Byford’s long-standing wish to explore rock ‘n’ roll a little more. The album is a personal journey highlighting his life and his passionate interests, from the history of the Middle Ages to growing up in the industrial North. A classic, masterfully constructed old-school British hard rock album, School Of Hard Knocks embraces a variety of musical genres and includes the Yorkshire folk classic Scarborough Fair, famously covered by Simon and Garfunkel. Byford and Fredrik Åkesson’s arrangement breathes new life into the legendary song.

"Welcome To The Show" lyric video:

Byford recently announced his first ever solo tour dates. The tour begins in the UK in April and continues to Europe in May.

The show will take an “evening with” format and will be split into two halves. The first half will feature a spoken word show compared by American comedian and star of VH1 Classic’s That Metal Show, Don Jamieson, where Don will quiz Biff on all aspects of his life and career. The second half will consist of a live show with Biff and his band.

Biff states: “The show will consist of some old songs, some new songs, some cover versions and some songs off the solo album. It’s going to be great and I am really looking forward to it. It’s going to something a little bit different, but it will be very cool, so I’ll see you all there!”

Tickets are available at myticket.co.uk and all usual outlets.