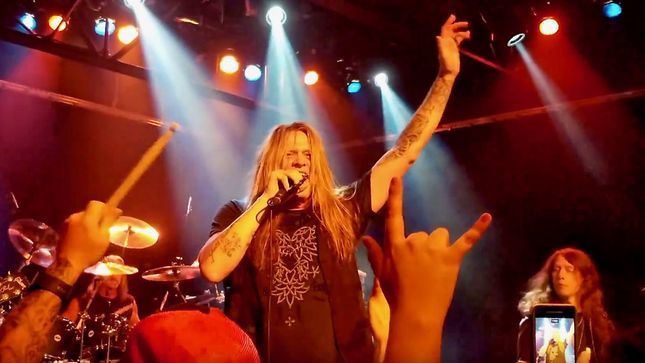 Sebastian Bach is front and center in a new Forbes.com feature, where he discusses his recently wrapped North American tour - which celebrated the 30th Anniversary of the self-titled Skid Row debut - and his longevity as an artist and performer. Following is an excerpt from the interview.

Q: Is there one song in particular that you've had the most fun digging up for this tour?

Sebastian: "Yes. That would be the song 'Forever', which is a bonus track on Skid Row’s greatest hits record. But that was the song that we opened up all of our shows with before we had a record deal, which was only like a month. … It brings back a lot of great feelings of when we were great friends, which, despite what those guys say, we were great friends, despite the bullsh**t that I read. And the lyrics go, 'Remember when we were young? Just two kids on the run with a fistful of dreams. Drinking wine—which I love—playing cool, stay out late, cutting school, smoke cigarettes like James Dean.' To me, those are great lyrics, right? I don't see how that's bad. I think that paints an incredible picture of being a teenager, cutting loose, having fun, exploring your dreams."

Q: There’s definitely been a renewed interest in heavier music lately, especially artists from the ‘80s and ‘90s. Do you find this is a better atmosphere to release new solo music?

Sebastian: "The first thing I would tell you is, I lived in Studio City (in Los Angeles) for two years recently. And I've moved since then, but my next-door neighbor was Adam Jones from Tool. And we became super f***ing close friends, nothing to do with music. His kids come over to my house to play. He comes to our birthday parties. He came to my 50th birthday party, brought Danny from Tool, and I'm really good friends with Adam. We bond over comic books. And believe it or not, I just recently had to turn down the opening slot for Tool. Adam wanted Sebastian Bach to open two weeks of shows in arenas. But I was already booked! So that's mind-blowing to me. … I think the success of bands like Tool is just undeniable that people want to hear heavy f***ing rock, and how can you deny that? It's right in your face.

You also can't deny that what I do for a living is a completely dying art. There's not kids coming up, locking themselves in their room, doing vocal histrionics. I don't even know if that's a word. But the way I learned how to sing, I don't think kids even could ever—I don't know, maybe I'm wrong, maybe kids on American Idol or something. But it just seems like so much of the vocal sound that I hear today is so over-processed and fake. That's why somebody like Adele comes out and people are like, 'Oh my God.' And it's like, she's just singing with her voice (laughs). Nobody else is. That's why she's so good."

On September 25th, Sebastian Bach headlined a solo show at Sony Hall in New York City. Original Skid Row drummer Rob Affuso joined Baz on stage for a rousing rendition of "Makin' A Mess", from the band's self-titled debut, released 30 years ago in 1989. Affuso later commented on social media by saying, "Great to be 'Back in the saddle!'"

Fan-filmed video can be seen below: