SIGNS OF THE SWARM Debut "Crown Of Nails" Music Video 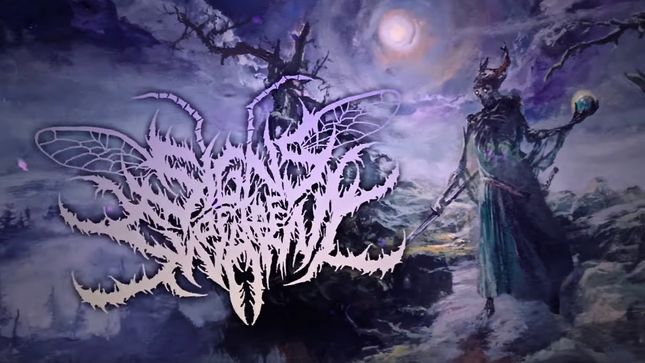 Pittsburgh, PA-based slamming deathcore titans, Signs Of The Swarm, have released a video for their new song, "Crown Of Nails" is off of their massively heavy forthcoming new album, Vital Deprivation, which will see an October 11 release via Unique Leader. Watch the clip below.

Vital Deprivation is the follow up to the group's unrelenting label debut, The Disfigurement of Existence - a release that saw the group experience a meteoric rise in the and proved Signs Of The Swarm to be one of the most promising young bands in the genre. The new album finds the band upping the vicious, blistering technicality and songwriting prowess while showcases new vocalist David Simonich's other-worldly roar.

The 10-track album was recorded, mixed, and mastered by Carson Slovak and Grant McFarland (August Burns Red, Rivers of Nihil, The Last Ten Seconds of Life) at Think Loud Studios in York, PA.

Signs Of The Swarm said of the release, "We are pleased to present our third album via Unique Leader Records, Vital Deprivation. We began writing for the album shortly after TDOE was released. From the beginning we had a sound in mind that was more aggressive and fast paced, but equally as brutal as our previous releases. What makes this album different from our past is that we wrote with pleasing ourselves in mind first and foremost. We’ve covered a lot of ground in just under 40 minutes. Some of the album may be what you expect to hear from us, and hopefully some may not. David Simonich is a powerhouse of a vocalist bringing a whole new range of motion to the band’s spectrum. His lyrical content and cadence bring a more emotional and poetic energy to Signs while retaining the aggression he’s become known for. We’d like to thank Carson Slovak & Grant McFarland for helping us to shape this album into a coherent message from beginning to end. Thank you to our fans who have supported us relentlessly, this is the first of many to come. Please enjoy Vital Deprivation."

Signs Of The Swarm will hit the road this fall as part of the Disentomb headlined Bloodletting North America tour alongside Visceral Disgorge, Continuum, Organectomy, and Mental Cruelty.