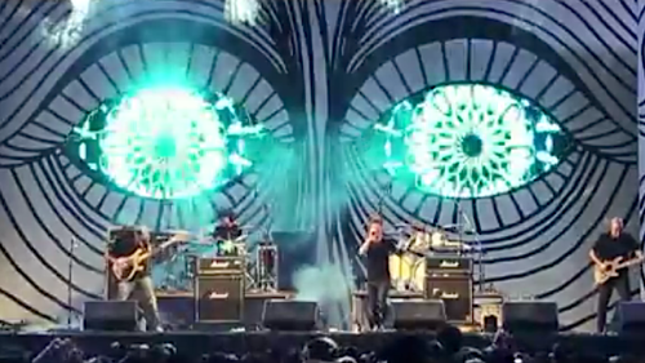 Multi-national, award winning progressive metal outfit Skyharbor have checked in with yet another line-up change, having recently parted ways with drummer Anup Sastry:

After months of deliberation, Dan (Tompkins) has decided to step down as our frontman and singer. This has been the hardest decision we have ever had to make in our history as a group, and it comes after months of discussion about the future of Skyharbor. We owe you an explanation, and we hope this following makes it clear as to why we reached this decision.

In a nutshell, things have developed with this group far quicker than any of us expected, and we have been getting some amazing opportunities to take our music around the world. We have been lucky enough to be able to play sporadically in India, Europe and the UK, but we have always wanted to take our music further afield to territories such as North America and Australia, and for longer periods than Dan could commit to. As many of you will know, Dan is a husband and a father, and touring for long periods of time with little financial security made it very difficult for the band to be active, and Dan felt strongly that he was holding us back from good opportunities.

Keeping this in mind and the fact that Dan rejoined TesseracT last year, we realised we had to make a choice - we could continue with Dan but as a studio project only, or we could move forward with a dedicated and focused lineup to help Skyharbor grow freely and achieve what we all hope to achieve with it. All 5 of us have collectively and amicably decided that the latter option was the best for the band.

We love Dan as a brother, and are incredibly proud of the two albums we've created with him and the times we have shared on the road. Words cannot describe how grateful we are for all he’s done for this band, and the passion and dedication he put into each show. He will be sorely missed, but will always remain close to us.

Which brings us to the good news:

We are very happy to welcome Eric Emery to Skyharbor as our new full time singer. Eric is a fantastic talent and we are all very excited to write and play music with him. When we reached out to Eric in the hopes of finding someone to fill Dan's shoes, we were all delighted by the quality of his audition and his enthusiasm to fill the spot. As a Grammy nominated engineer, Eric brings to the band not just his voice but his music production experience and knowledge, and we look forward to performing live with him, starting with our first US and Canada tour later this year, details of which we will announce shortly.
As tricky as the last few months have been, we truly believe that everything has worked out for the best. We couldn't be more confident in our new lineup and our future.

We'd like to thank you all for the constant messages of support and requests to see us perform all over the world. You inspire us to continue taking this band forward. We hope for your continued support and understanding through this transitional period and hope that you enjoy the exciting new phase of music that we will be sharing with you very soon. See you on the road!

Following is Tompkins' statement regarding his departure:

“I’m incredibly sad to be parting ways with my amazing friends Keshav, Devesh, Krishna and Aditya. We have collectively come to the decision that it is in the best interest of the group that I step down as the frontman of Skyharbor. From the very start I have put my heart and soul into the project but circumstances have made it clear that I am holding the band back from opportunities too good to miss. We all agree this is the best thing for everyone. We will always be close friends and I wish them only the best for the future.”

Guiding Lights offers 10 tracks of exhilarating and heady progressive music, weaving a sonic tapestry of technically beautiful and imaginative melodies around crunchy metal riffs and sweeping, atmospheric vocals. The album was funded by fans after a fast paced and successful PledgeMusic campaign and has been mixed and mastered by legendary Australian producer Forrester Savell (Karnivool, Animals As Leaders, Dead Letter Circus).

Comments guitarist and songwriter Keshav Dhar: "We are thrilled to announce that our second record is officially complete, and it is titled Guiding Lights. We have worked incredibly hard over the last two years on making this album the most spectacular effort we could create, and we thank our AMAZING fans for helping bring it to life and take it to the next level! We can't wait for you to sink your teeth into it!"

The album release rounds out a fantastic year for Skyharbor, which has seen appearances at Download Festival, Graspop and a European tour, as well as a nomination for Global Metal Band at the Metal Hammer Golden Gods. On top of this the band released their first single/video for "Evolution" in June 2014 which can be viewed below.

Guiding Lights follows on from the 2011 debut, Blinding White Noise: Illusion & Chaos, which won the band fans worldwide, including Lamb Of God who handpicked the band to support them in India and saw the band picked to play at festivals across the globe whilst also resulting in awards for Best Song, Best Album and Best Band at the Rolling Stone India Metal Awards.