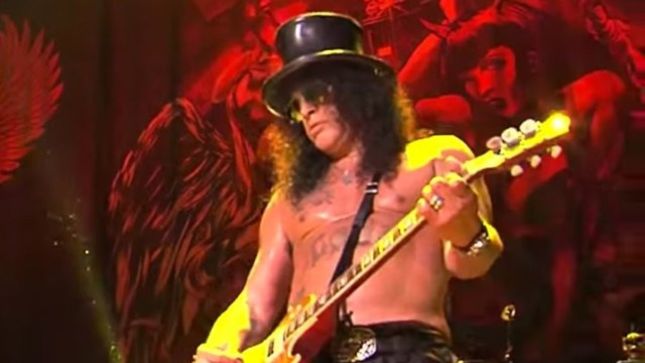 Guns N' Roses guitarist Slash is featured in a new interview with Poland's Wirtualna Polska, discussing his early days as a guitarist, his work ethic, and how he chose the band members for his solo band, The Conspirators.

On being called a "workaholic"

Todd Kerns, who plays bass for Slash Featuring Myles Kennedy And The Conspirators has revealed that the band filmed a live DVD on February 20th at the legendary Apollo in London, England. Of course, tickets were completely sold out. The DVD will be released via Eagle Rock Productions, presumably later this year.

Slash himself has commented, "London, that was a fucking blast! I'm glad we captured the night on video! Thanks for a truly memorable evening! RnFnR!"

The 22-song setlist from London was as follows:

Catch Slash Featuring Myles Kennedy And The Conspirators live on tour, in support of their most recent album, Living The Dream. Confirmed dates are as listed: