SLAYER - Lost In Vegas React To "South Of Heaven": "When I Think Of Metal, This Is What I Like" 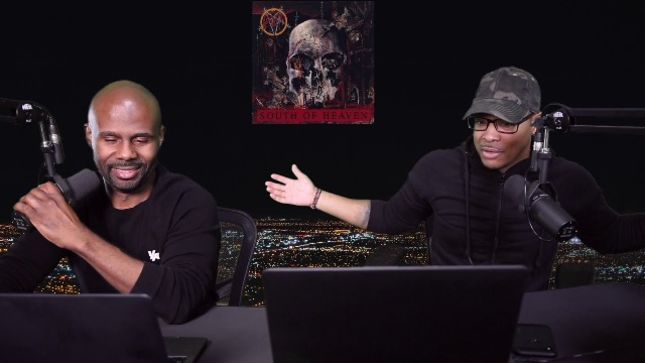 Lost In Vegas hosts Ryan and George have posted a new episode of their newly launched podcast, offering up their unbiased reactions to the Slayer classic, "South Of Heaven". Check it out below.

Tickets for Slayer's November 30 show at the Los Angeles Forum went on sale last Friday and by the end of the day, had sold out. Due to the quick sell out, today Slayer announces a second Forum show now confirmed for Friday, November 29 for fans who may have missed out on getting tickets. This show is the last addition to Slayer's Final World Tour. Tickets go on sale this Friday, July 19 at 10 AM, local.  Log on to slayer.net for all ticketing and VIP package details.

On Saturday, November 2, 2019, Slayer - Tom Araya/bass and vocals, Kerry King/guitars, Gary Holt/guitars, and Paul Bostaph/drums - will set off on The Final Campaign, the seventh and final leg of its farewell world tour. This last hurrah will start at the ExploreAsheville Arena in Asheville, NC, and see the band taking its goodbye bow at the Los Angeles Forum on Saturday, November 30.

Accompanying Slayer for this last ride are Primus, Ministry and Philip H. Anselmo & The Illegals performing a vulgar display of Pantera, who will support on all dates.