SLIPKNOT's JIM ROOT Offers Advice To Aspriring Guitarists - "Play With People Who Are Better Than You; Give Yourself A Challenge" 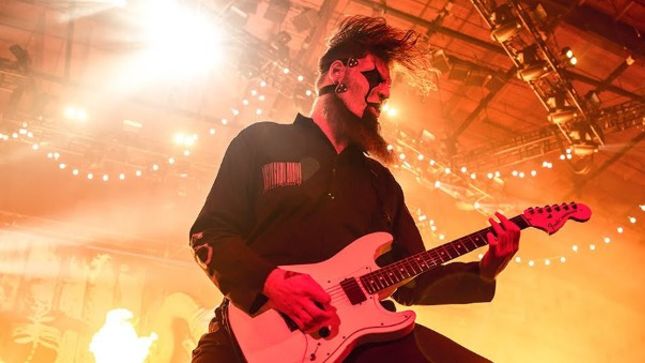 Slipknot guitarist Jim Root (#4) recently spoke with Music Radar and offered his five tips for aspiring guitarists. Following is an excerpt from the rundown.

Get a guitar that you love

Root: "For one reason or another, a lot of guys wind up with a guitar that isn’t really right for them. The guitar can be kind of close, but something about it is just a little off. And when that happens, you don’t feel inspired by the guitar. It kills your ambition. On the other hand, if you find a guitar that you really love and it just feels totally right, you’ll be more apt to want to play it; you won't wanna put the thing down. And, of course, we know what happens then: You’ll become a better player, because the whole act of practicing won’t feel like work – it'll be fun.

My first guitar was a Takamine that my dad got me. I loved it and just couldn’t put the thing down. It just worked for me. So really, just make sure that whatever you get that you’re happy with it. Don’t shortchange yourself. It doesn’t have to be the most expensive guitar in the world; it just has to be the guitar that's meant for you."

Root: "There’s no one way to do anything in music. There are no rules; there are no written instructions to follow. So whatever you want to do, just get going. I started out playing with different drummers in basements before there was even a band. It didn't matter, though, because I was already on my way.

Play with people who are better than you. That's something else I'd recommend. Up your game. It might be a little daunting at first, but there’s no better kick in the ass than by striving to get to the level of some other guys. The first band I was in was a speed metal band, and the other guitarist was the guy who was teaching me how to play. He was four years older and could rip all over the fretboard. The only thing I could do was try to keep up. So give yourself a challenge, just get on with it.”

The clip below features Root taking Stay Metal Ray through his Knotfest Roadshow rig used this past summer.