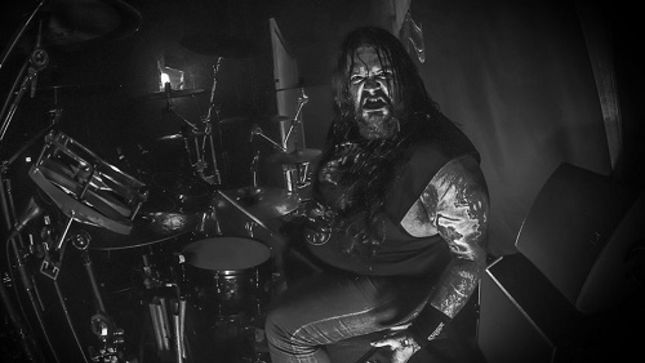 "Unfortunately I have to tell you that I have to leave Sodom. Due to some changes at my full-time job, as well as a few other matters, I do not see any chance of continuing to crush the skins for Sodom in the future. I had a great time, I am proud of what we have achieved and I thank Onkel Tom Angelripper, Yorck Segatz and Frank Blackfire, and the entire crew for many extremely awesome moments. It was an honour to be part of one of my two all-time fave bands during the last two years. There are always important decisions in life and this is one of them! Thanks for everything!"

Sodom has issued their own statement, which reads:

"We sincerely regret his decision, but we respect the inducing circumstances. Sometimes even we have to admit that musical achievements are not everything in life. Against all odds of the modern music business, this music will forever enrich our lives. That has always been his motto.

We are looking back at two successful and crucial years, which have not only added to the history of our band, but will also shape it for years to come.

We wish him all the best for his musical, professional and private endeavours. He will of course remain a loyal colleague and trusted friend, backing us in word and deed with his musical expertise and vast knowledge of the metal scene.

Glückauf, dear Husky, as we use to say in the Ruhr Area!"

All upcoming shows, beginning with Steelfest in Hyvinkää, Finland on May 16th, will take place as scheduled. A new drummer will be announced shortly.