SÖLICITÖR To Reissue EP On Gates Of Hell Records In October 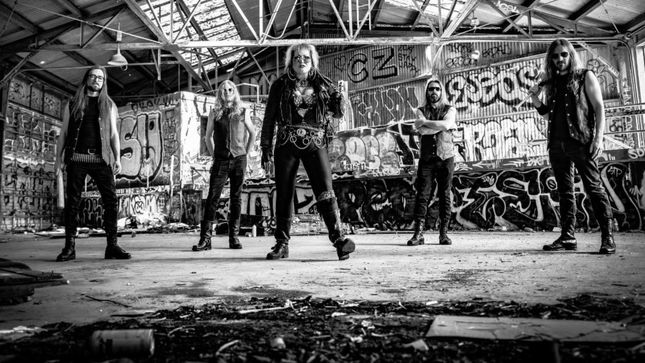 Gates Of Hell Records has announced the October 25th reissue of Sölicitör's self-titled EP, a blinding combo of feisty speed metal with old-school metal brashness! The band is streaming the original release (May 2019) at Bandcamp.

One of the newest editions to the Gates of Hell Records roster, this reissue of Sölicitör's thrashy and storming self-titled debut 2019 EP sets the stage for their impending first full-length, due for release in 2020.

Formed in 2018 after the split of Seattle’s Substratum and Hexengeist, a new band came together and was immediately faced with a common problem: They couldn’t land on a proper name. The metal scene has accounted for and laid claim to thousands upon thousands of names, all with differing levels of effectiveness. The problem for this newly-fledged quintet was that they wanted something that didn’t pigeonhole them and provided a level of ambiguity that would be intriguing for potential listeners. After an extended debate, “Sölicitör” got the nod for its simplicity, and the fact single words and a bold logo always stand out when slapped on the front cover of an LP or t-shirt. Plus, as vocalist Amy Lee Carson says, “It makes you wonder who the hell we are.”

Playing a brand of breakneck speed metal that is carried through by the banshee vocals of Carlson, Sölicitör (who are rounded out by the guitar tandem of Matthew Vogan and Patrick Fry, bassist Damon Cleary-Erickson and drummer Johann Waymire) quickly got to work on writing and recording new material, releasing a demo and an EP barely a year into their existence. Sensing there was going to be a groundswell of underground support for Sölicitör, Gates of Hell Records signed the band for the re-release of the Sölicitör EP 2019 that will be followed by a proper full-length album some time in 2020.

As displayed on the four-song EP, Sölicitör’s meld of power, speed and thrash metal is as tight and menacing as they come, and will immediately appeal to fans of Chastain, Liege Lord, Mercyful Fate, Exciter and Painkiller-era Judas Priest. Recorded by Cody J. Brumlow of Weaponlord at Mountlake Terrace, Washington, at Hangar 12 Studios, Sölicitör’s first EP stemmed from the songwriting collaboration of Vogan and Fry, who combined to work on some tracks Vogan had left over from Substratum and turned them into Sölicitör material. The EP quickly drew praise, with Ride Into Glory.com citing it as one of the “best traditional metal releases of spring 2019.”

Sölicitör EP 2019 is merely a taste of what the band can do. As they continue to work toward their 2020 full-length album that will be celebrated with an appearance at the Keep it True festival in Germany, Sölicitör will be out on the road, battling the conditions (including driving through a tornado!), and bringing their no-holds-barred brand of metal to the deserving denizens of the underground.