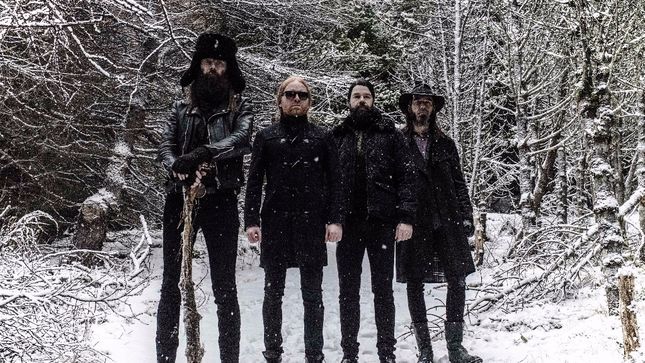 Sólstafir have premiered the dark and intense new music video for the track "Bláfjall," which is taken from their latest released full-length, Berdreyminn. The video tackles heavy subject matter such as death and grief.

Sólstafir comment: "Here it is, our 3rd video by the almighty Bowen Staines. After we did our last video with Bowen, 'Lágnætti,' we talked about for years to make another video together. As usual, adventures are like magnets when we join up forces, and this one was no different. We are super proud of the result, and yet again, Bowen shows that he is the master of this game. Enjoy, 'Bláfjall.'"

Director Bowen Staines adds: "'Bláfjall' was produced and filmed in Iceland from August – October 2018, and edited until April 2019 at the Don’t Panic Films studio in Massachusetts. While originally shot in 4K, the finished product was then scanned in its entirety onto 35mm film. ‘Bláfjall’ tells the story of a mind overtaken with grief, and the mental gymnastics often employed to circumvent grief in order to avoid confronting it.

"Everyone has their secret sorrows which the world knows not; wounds that never show on the body. In ’Bláfjall,’ these wounds take the form of memories relived in the present, yet altered by the knowledge of what will come in the future. If grief were sentient, it would attack these memories with the voracity of a virus slowly destroying a computer hard drive, or an illness ravaging a body.

"Pre-production for ‘Bláfjall’ started almost two years ago, and the first day of principal photography began in Hvalfjörður, Southwest Iceland. Predictably, it was so windy (a 115kg dolly track blew over), that I had to rewrite that day’s five-page shotlist in the trunk of Addis’s Jeep.

"The rest of the video came together wonderfully, thanks to our cast of Flosi Þorgeirsson (HAM, Glerakur), Bella Morgan, Palli Banine, and Minerva Geirdal. The only other notable thing that happened during this production were the days leading up to crashing that infamous Mercedes.

"The car was an automatic, and the transmission slipped like butter. The momentum from the slightest forward acceleration, say, at a stoplight, would send the gearshift flying back into first gear, and the engine redlining; there is no sound quite like doing 40 on the highway in first gear. I was heading to pick up Flosi in Reykjavík, when suddenly I was doing 60kph in reverse while still going forwards, with the whole car transforming into an industrial noise album.

"The day we filmed the crash, we’d spent hours lining the car up, bracing the steering wheel properly, and closing the roads. It looked like it was dead-on, and then it wasn’t. It missed the other car by centimeters, veered off the road, hit an embankment on the side of someone’s driveway, cleared the entire driveway, went through a fence, and crashed into a rock in front of a horse stable. The next try was dead-on.

"A heartfelt ‘Thank You’ to everyone who was involved with the making of Sólstafir’s ‘Bláfjall.’ To the guys in the band: thank you for trusting me so unconditionally, and allowing me to tell this story with your music. As always, it is a true pleasure to create with you.

"We hope that you enjoy watching this as much as we enjoyed making it.
Takk fyrir okkur.