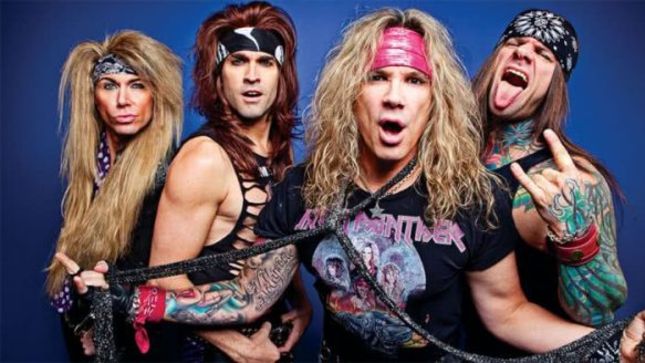 Courtesy of Andertons Music Co., the clip below features Steel Panther guitarist Satchel in deep concersation about his signature Charvel guitars, inspirations and role models, along with how to maintain such stunning good looks, the lifestyle of a rockstar, and much more.

Q: Who do you sort of measure yourself against if you're getting more girls than say, Ed Sheeran?

Satchel: "Obviously, Ed Sheeran doesn't get a lot of girls. People think that Ed Sheeran gets a lot of girls; well, he's a pop star, so there's gonna be some gold diggers after him, right? But he doesn't have the sex appeal. Like, yeah, he's 25 years old, but look at David Coverdale. David, he just turned 92, and David Coverdale is dating Sports Illustrated models. Like, he just throws them out, like, 'I'm done with you, on to the next one,' because he's a rock star, and that's what we're trying to pattern our life after - guys like David Coverdale. Ed Sheeran, I mean, that's cool if you want to date a 15-year-old girl, and some guys do (laughs)."

BraveWords was contacted by one Metal Matt, who informed us he performed an acoustic version of the Fight classic "Into The Pit" with none other Satchel. For those that may be unaware, Satchel's alter ego is "Russ Parrish", who recorded and toured for Fight's 1993 debut album, War Of Words.

Matt: "This was just insane. Took the opportunity to sing an epic track by Rob Halford's amazing Fight band, we made history and played it for the first time acoustic! It was just surreal having Satchel there next to me playing this track. Dreams do come true. Huge thanks to Steel Panther for being the nicest guys in the business. DEATH TO ALL BUT METAL!!"