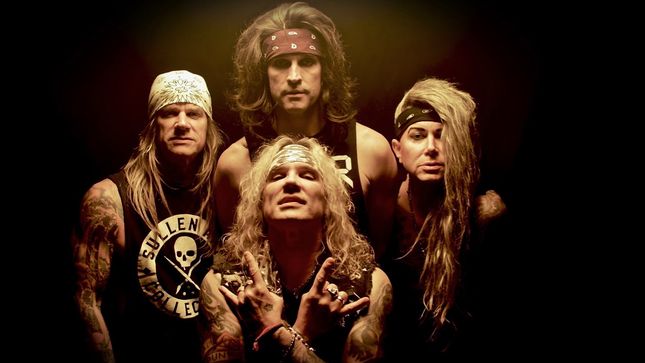 "In 1752, Benjamin Franklin captured electricity for the first time and forever changed the course of history," says Steel Panther. "But, was it the greatest discovery of all time? Find out our expert opinion in Part One of a series we're calling The World's Greatest Discoveries!"

Steel Panther recently released a video for the new song, "Always Gonna Be A Ho", featured on their upcoming  fifth studio album, Heavy Metal Rules, out on September 27.

The new clip is a companion video to previously released “All I Wanna Do Is Fuck (Myself Tonight)”. The first video depicts vocalist Michael Starr’s journey to the wedding chapel alongside bandmates guitarist Satchel, bassist Lexxi Foxx and drummer Stix Zadinia. That video ends with Starr’s bride to be running off with bandmate Satchel. The new video for “Always Gonna Be A Ho” goes deeper into the relationship between the bride (played by Syd Wilder) and the band. Frankie Nasso returns as the director of touching video showcasing Starr’s heartbreak at losing his bride and the end shows what happens to cause the love to go south. Both videos can be found below.

The new album is available for pre-order in various bundle configuration here.

“Heavy Metal Rules is the ultimate party album. Anthem after anthem and hook after hook, the songs will provide the soundtrack to your new bitchin’ heavy metal life. The first single, 'All I Wanna Do Is Fuck (Myself Tonight)', is the ultimate song about self-love and having a positive personal self-image. It is the kind of song you put on to get yourself in the mood whether you’re getting ready to have sex with yourself or 17 girls in a row,” explains Steel Panther.

From the opening track “Zebraman” (which is audio taken from the classic film Heavy Metal Parking Lot) to the emotional album closer “I Ain’t Buying What You’re Selling,” Steel Panther have created 36 minutes of audio eargasms. Songs like “Let’s Get High Tonight,” “Fuck Everybody” and “Gods Of Pussy” are destined to become natural additions to the band’s setlist. “I’m Not Your Bitch” is an anthem for all acknowledged genders and sexual orientations worldwide. The video for the first single “All I Wanna Do Is Fuck (Myself Tonight)” was shot in Las Vegas and features cameos from numerous celebrities from music, comedy, YouTube and more.

Hide your women, children and your pets. Steel Panther are heading out on a headline tour of North America. The tour, called the Heavy Metal Rules Tour, kicks off in early October and runs through mid-December.

The tour will be in support of the band’s new studio album, Heavy Metal Rules. The 27-date trek will make stops in markets such as Orlando, FL; Boston, MA; New York, NY; Detroit, MI; and Chicago, IL to name a few.

Steel Panther live is always the ultimate party and has developed them a loyal fanbase around the globe. More information on all shows can be found here.