STEEL PANTHER Take You Behind The Scenes On "All I Wanna Do Is F@#k (Myself Tonight)" Video Shoot; Episode #3 Streaming 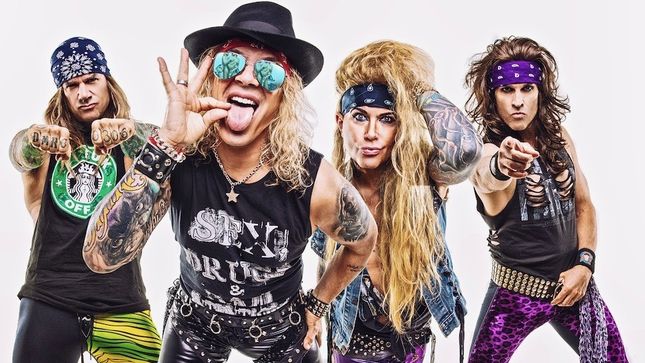 Steel Panther have released more footage taking you behind the scenes in Sin City as the band shoots the official video for the single, "All I Wanna Do Is Fuck (Myself Tonight)". Watch three available segments below:

The new single, "Gods Of Pussy", is available for streaming below, as well as at all digital streaming services. The song is also available as an instant download via all digital retailers.

Lyrically, “Gods Of Pussy” is a life manifesto as only vocalist Michael Starr, guitarist Satchel, bassist Lexxi Foxx and drummer Stix Zadinia can unleash upon the world.

Steel Panther explains: “KISS wrote ‘God Of Thunder,” Def Leppard wrote ‘Gods Of War’ and we wanted to get in to the ‘God’ business too. This is an autobiographical description of a day in the life of Steel Panther. So, when you’re feeling a little unsexy and you need to get your mojo flowing and turn up the heat, play this song at 10 and you too can become a God Of Pussy.”

Steel Panther recently announced the Heavy Metal Rules Tour, which kicks off in early October and runs through mid-December. Crobot and Stitched Up Heart have been added as openers with Crobot opening from October 8 to October 20, and Stitched Up Heart opening from November 24 to December 22. The 27-date trek will make stops in markets such as Orlando, FL; Boston, MA; New York, NY; Detroit, MI; and Chicago, IL to name a few. Dates below.

Steel Panther live is always the ultimate party and has developed them a loyal fanbase around the globe. More information on all shows can be found here.