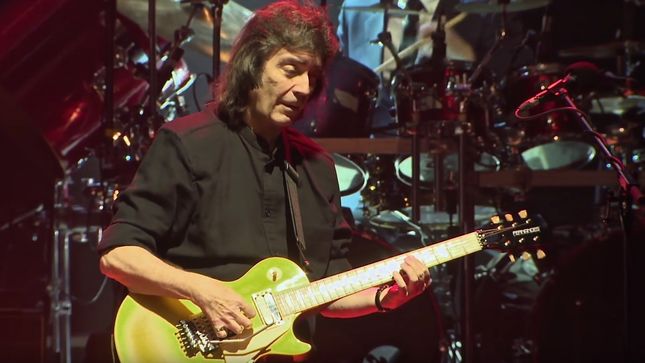 Following last year's sell-out Genesis Revisited tour, prog icon and former Genesis guitarist, Steve Hackett, announces a 6-date UK tour in October. Treating fans to many favourite Genesis and Hackett numbers, this time Steve and his band will be accompanied by a 41-piece orchestra. A video trailer can be found below.

The decision to undertake this tour was cemented following the critical success of last year's one-off US performance of the Genesis Revisited music with his band and the Buffalo Philharmonic Orchestra, conducted by the charismatic Bradley Thachuk.

It went down a storm with the audience and sounded amazing, with the orchestra adding even more texture and colour to these classic tracks, prompting Steve to want to perform more shows in this way. Such was the gusto and verve brought to the performance by conductor, Bradley Thachuk that he will fly over to the UK to conduct the October shows. This show promises to be a transcendent experience!

Steve explains, "I always hoped that the Genesis music would one day involve an orchestra and I'm proud to say I'll now be able to make that dream a reality on my next British tour, involving my own extraordinary rock band alongside a full-sized orchestra."

The show will feature some of Genesis' best-loved songs, including "Supper's Ready", "Dancing With The Moonlit Knight", "Firth Of Fifth" and more. Steve will not be neglecting his remarkable solo repertoire and there will tracks included such as "Shadow Of The Hierophant", "El Niño" and "The Steppes". 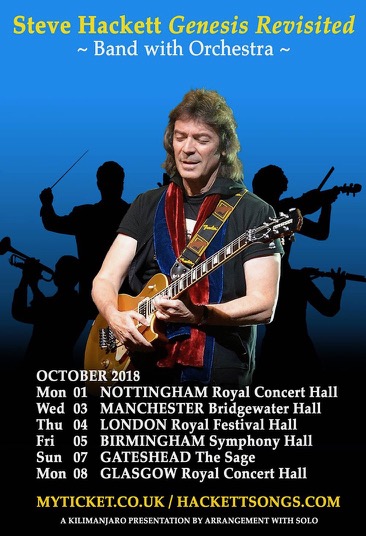 Tickets go on sale on Friday, January 26th. Get them at myticket.co.uk/ and venue box offices.

Joining Steve on the tour are his regular musicians Roger King (keyboards), Gary O'Toole (drums/percussion), Rob Townsend (saxes/flutes) with Nad Sylvan on vocals. They will be joined on this tour by Jonas Reingold from The Flower Kings on bass.

On Friday, January 26th, Inside Out Music will release Wuthering Nights: Live In Birmingham, the new live release from Steve Hackett. Watch "El Niño" from the upcoming release, below.

“In the run-up to the Wuthering Nights DVD release, I'm thrilled to put out El Niño, which takes off with fiery excitement from the word go... Enjoy!” - Steve Hackett

Wuthering Nights was filmed at the Birmingham Symphony Hall during Hackett’s recent, critically-acclaimed Genesis Revisited & Classic Hackett tour. Available as 2CD/BluRay Jewel Case and Digital Album, this is a must-have for any prog fan. All video formats include 5.1 Surround Sound and various extras.

This tour marked the 40th anniversary of Wind & Wuthering, Hackett’s last album with Genesis which reached #7 in the UK album chart. To celebrate Steve and his band played five of the best-loved tracks from this iconic album: “Eleventh Earl Of Mar”, “One For The Vine”, “Blood On The Rooftops”, “…In That Quiet Earth” and “Afterglow”.

Other fan favorites from Hackett’s Genesis days were ‘revisited’: “Dance On A Volcano”, “Inside & Out”, “Firth Of Fifth”, “The Musical Box” and the classic “Los Endos”. This mesmerizing show marks the first ever live performance by Hackett and his band of the tracks “One For The Vine” and “Inside & Out”, and also includes many of Hackett’s solo fan-favorites as well as material from his latest studio album, The Night Siren.

Steve recalls the Birmingham performance: “I’m excited about the imminent release of Wuthering Nights. It felt special to celebrate the 40th anniversary of Wind & Wuthering, the Genesis album I had the most songwriting involvement with and a favourite among many fans. Songs like “One For The Vine”, “Eleventh Earl Of Mar” and “Blood On The Rooftops” come across powerfully on this release, which also features other Genesis and solo Hackett favourites along with songs from my latest album The Night Siren... Sit back and enjoy!”

The DVD / Blu-Ray also includes fascinating behind the scenes footage, most of which was filmed on the day in Birmingham. There are also three videos for tracks from The Night Siren: “Behind The Smoke”, “Fifty Miles From The North Pole” and “West To East”.