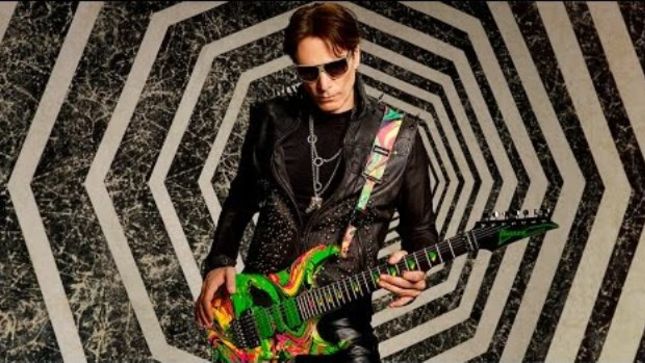 Guitar legend Steve Vai will be doing a live Q&A on his official Facebook page today (Tuesday, March 24th) at 12.00 noon PST (Los Angeles). Go to this location to tune in and take part.

Vai recently spoke with Guitar Interactive about his new PIA signature guitar, which he has referred to as the evolution of his long standing JEM signature series.

Vai on the JEM line of guitars:

"When I came out with the JEM in the beginning, just the sheer fact that I approached Ibanez and said, 'This is the guitar I want, oh, by the way, I want to put a monkey grip in it. And by the way, I want to release it in three Day-Glo different colors; green, pink and yellow,' and they're probably just scratching their head going, 'What the heck, man? This guy's crazy!'

This guitar was a huge risk, but I didn't see it as a risk because I had no expectations. I didn't back when I designed the JEM. It was a completely personal project for me to build a guitar that had these things in it that I wanted, and that no other guitar had. It was very simple and innocent, and my expectations were zero because I didn't think anybody would be interested in it, or that it would go on to have the kind of life that it has. I just wanted a guitar that fits my idiosyncrasies. So when Ibanez said, 'We want to release this guitar,' I took it seriously, of course, but I didn't think, okay, well what's the market? You know, what sells most? What colors do people want? There was none of that. I said this is my guitar. Do you like it? Great. If not, okay, no problem, but this is what it is, and I don't want to change it.

It was very bold, but there was no fear or concern. On my part, it didn't matter. I think for aspiring creative people, it's important to understand, and this is something I've recognized in my own career."