STEVE VAI - "I Could Never Play Like Him, I Never Tried; Only An Idiot Competes With EDDIE VAN HALEN" 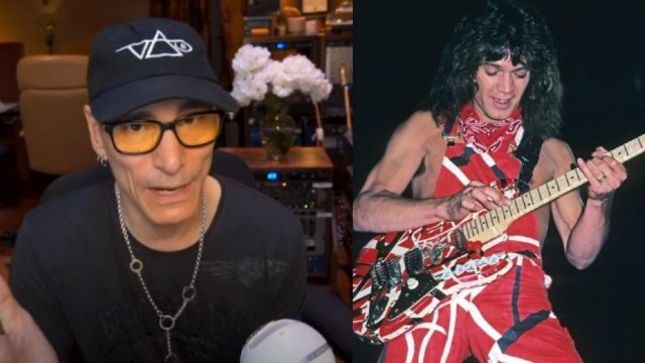 In an article penned for Rolling Stone, Steve Vai recalls his jams and friendship with guitar legend Eddie Van Halen, who passed away on October 6th at age 65 following a long battle with throat cancer. Following is an excerpt.

Vai: "I was fortunate that I had a really great personal relationship with Edward. You know, one of the things you discover when you got close with him is there was a soft side. And he had an incredible sense of humor. He was very witty, very excited when he was doing things that he was excited about. He was very simple; he was kind of like a MacGyver. He kept putting things together with tape, with bubblegum, and he would make it work. And it would just always sound so good.

The first time I met Edward, I went to see Allan Holdsworth perform at the Roxy, and Edward came out and played. I went backstage and talked to him and I told him I was working with Zappa. And he was a Zappa fan, so I gave him my number and said, “If you ever want to meet Frank, let me know.” And oddly enough, the next day, my roommate said, 'Ed Van Halen called.' I gave him Frank’s number. Then the phone rings, and it’s Frank. And he says to me: 'Hey, sport, Edward Van Halen is here, come on up.' And I went up to the house and the three of us sat there all day and listened to music and jammed. He was amazing back then. He picked up this one guitar, and the nut was a little too shallow, so the string was buzzing. He found this huge screwdriver and (stuck it) underneath the nut. The screwdriver was sticking out like a foot and a half, and we were jamming like that, and he made it work.

The day after I left David Lee Roth’s band (in 1989) — I don’t know how Edward found out — but he called me. That was the start of a nice relationship and friendship. For about six months, we actually hung out a lot together, and I got to know the guy.

This would be a very interesting story for guitar players, I think: I was at my house in Hollywood, and in my studio, I was using my guitar, my rig, my pedals, my amps. And Edward came in. We were just hanging out and talking, and he says to me, 'Let me show you this one thing I was working on.' And he takes my guitar and he starts playing and I realized instantly that it was Edward Van Halen. It didn’t sound anything like me. It had that 'brown sound.' It was everything we love about Ed’s tone. He was playing my exact gear, and it sounded like him.

Of course, I could never play like him. I never tried. Only an idiot competes with Eddie Van Halen. But I knew that going into it. But when you’re playing that stuff and you’re a guitar player, you see the infrastructure of it. It’s just so beautiful. I remember making Eat ‘Em and Smile and we were working with Ted Templeman and he played me just the naked tracks of Edward’s guitars, and even just one track, one microphone of Edward’s guitar just sounded like an orchestra. Perfectly packaged in this powerfully dynamic expression.

What did we lose? I like to think about it as what we gained. Everything in this world is coming and going. We just don’t know when it’s going to go, and if it does, it just means we went before it. I like talking about contributions he made because it was monolithic. I did an interview with you guys years ago, when I was asked who the game changers were. If I had to use my intuition, it’s Hendrix, it’s Van Halen, in rock guitar.  So many great guitarists came along and contributed, but those guys just did something for us that reshaped not just the way we played instruments, but the way we write the music, the way we dress, and the way we act onstage. It goes really deep. So I firmly feel that he was one of those monoliths.

I feel the shock and the loss of the entire guitar community. I just want to say let’s focus on all that he gave us, because it truly was a gift. And he was brilliant."