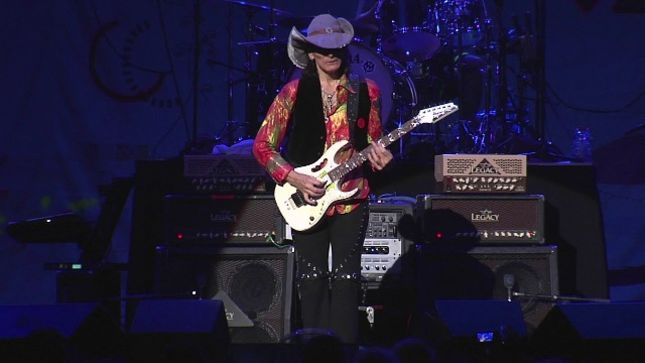 Guitar legend Steve Vai has checked in with the following:

"I've always had a pull to visit and perform in far away 'exotic' places and had the great pleasure of doing so many times starting in the early '90s when it was relatively rare for American rock musicians to visit places such as Eastern Europe, Russia, China and South America. Many times through the years I tried to tour Columbia and Venezuela but couldn’t because of the various challenges in getting there. But on the Story of Light Tour, we visited and performed in such places. The fans were incredibly supportive and these next few clips coming up show this. Thank you so much to all my SA fans who come to these shows. You rock so hard!!!"

"Walking onto the stage from my dressing room, then waiting in the wings those few moments before we step out onto the stage, walking onto the stage, hearing the audience roar, feeling the energy of the room in the moment, then receiving the audience with some bombastic waves of sonic guitar distortion, then kicking into the show... totally exhilarating. This is one of those things I envisioned myself doing when I was a kid. You become what you think about, and there it is. You can see the entire 3.5 hour tour documentary that this clip is from on disc 2 of the Blu-Ray release of Stillness In Motion that came out on September 13th! "

Vai released the Blu-Ray version of Stillness In Motion on September 13 via his personal record label Light Without Heat, distributed by The Orchard. He has posted an "unwrapping" video of the package, which can be viewed below.