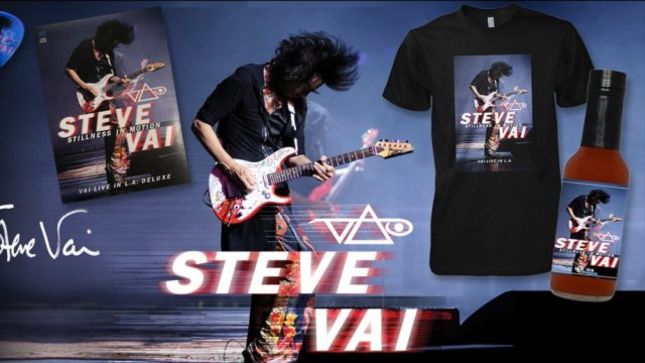 ... which he followd up with this update:

"I’ve noticed that some people are surprised I decided to choose something as abstract as hot sauce to include with this purchase… well, consider that the same guy that came up with this idea is a beekeeper.

Perhaps beekeeping and collecting hot sauce are my only simple hobbies. I have a pretty huge hot sauce collection that I started collecting perhaps 20 years ago. I always loved the creative packaging of hot sauce, and there is a huge underground community of people that are hot sauce collectors and enthusiasts. One day I’ll post my collection with all the crazy labels and hot meter readings.

We are planning on re-releasing most of my catalog on CD and Vinyl in various remastered and updated packaged ways, and one of the collectable elements we will be offering for each release is a specific bottle of hot sauce. And I can tell you, when the Fire Garden one comes out, stand back!!! That will be some powerful FIRE on the tongue. Some people enjoy tongue fire.

Hey, I gotta have some kind of hobby. Why not bees and hot sauce? In the past I’ve collected such odd things as different world currencies, and hotel room keys. Don’t even ask! But I had a currency collection that I started in the 80’s touring with Zappa way before the Euro when every country had its own currency. There were only a few currencies I didn’t have. And for some nonsensical reason, around that same time I decided to collect hotel room keys from all the hotels I stayed at while on tour with Frank, up through Roth. That’s close to a thousand keys… Why!?!?!

I ended up giving these collections away years ago.

Eh… could be worse. I could have been a collector of bad ideas, Pheww!"

Vai has announced the release of Stillness In Motion on September 13 via his personal record label Light Without Heat, distributed by The Orchard.