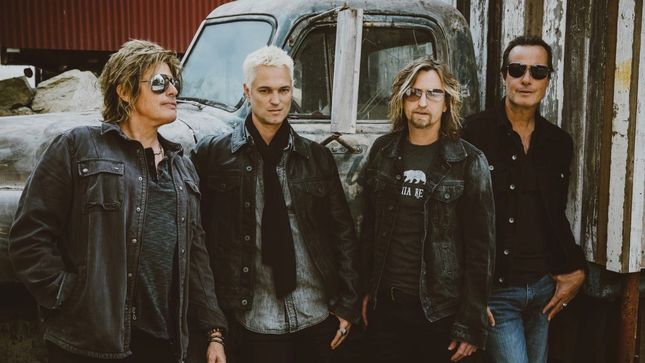 At a private show last night in Los Angeles, Stone Temple Pilots made its triumphant return to the stage at the Troubadour where the Grammy-winning group welcomed Jeff Gutt as their new lead singer.

Gutt (pronounced goot) is a veteran of the Detroit music scene and has spent the last year writing and recording with founding members Dean DeLeo, Robert DeLeo and Eric Kretz. In addition to introducing Gutt, the concert also featured the debut of the new Stone Temple Pilots single “Meadow.”

Available now via digital and streaming services, the song will appear on the band’s as-yet-untitled album, which will be released on Atlantic/Rhino in spring 2018 in conjunction with a North American tour. Listen to “Meadow” below.

Stone Temple Pilots announced their new lead singer on SiriusXM’s Volume channel 106 during a special broadcast, “Stone Temple Pilots Reborn,” from the Troubadour in Los Angeles on November 14th. The complete concert will premiere this Friday, November 17th at 5 PM, ET exclusively on SiriusXM and can be heard on Howard Stern’s Howard 101 channel, as well as Lithium (channel 34). The show will also be available via the SiriusXM app and online at siriusxm.com.

This show marks the beginning of a new journey for the band, one that began last year when the DeLeo brothers and Kretz launched a worldwide search for a new singer with whom to write, record, and tour.

“We wanted someone who would not only do our earlier songs justice, but would also write new songs and carve out a different path forward with us. It took some time, but we found our guy,” Dean explained.

Before choosing Gutt, the trio received and reviewed about 15,000 submissions online before selecting more than 30 singers to audition in person with the group at Studio 606 in Los Angeles. Gutt sang with the band on the last day of auditions. Ironically, he was the only one who hadn’t submitted music online. Instead, he was invited after Robert DeLeo heard about Gutt after DeLeo had played a show in Detroit with the Hollywood Vampires.

“Talk about a happy accident,” Robert said. “It was clear right away that Jeff had the range to sing vocally challenging songs like 'Piece Of Pie' and 'Interstate Love Song'. But we soon discovered that he also has a great ear for melody and knew how to write a song.”

In September 2016, the four of them started working together and spent the next several months finishing off song ideas and writing new music. “The chemistry was there from the start, and Jeff kept coming up with one great melody after another. We ended up finishing 14 songs, which is the most that Stone Temple Pilots has ever recorded for an album,” Kretz said.

For his part, Gutt is prepared for the inevitable comparisons to STP’s original singer Scott Weiland, who passed away in December 2015.

“No one will ever fill Scott’s shoes and I’m not trying to - he’s a legend. But these songs deserve to be performed and people want to hear them. I’m just honored that the guys chose me to help them continue to build this band’s legacy,” Gutt said.

The newly minted quartet is busy mixing the new songs now and plans to release the as-yet-untitled album in early 2018. This will be the group’s seventh studio album since its multi-platinum 1992 debut Core, and its first full-length since Stone Temple Pilots in 2010. The album will be released on Atlantic/Rhino, continuing the band’s legacy with Atlantic Records to over 25 years.